Budget to be updated to facilitate payments to public sector workers 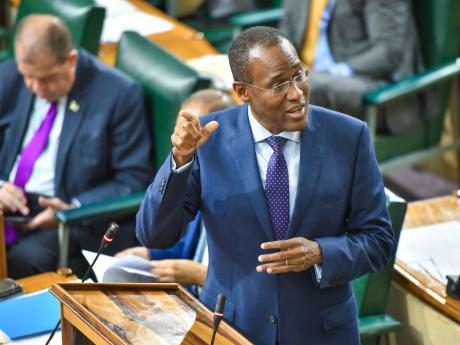 He explained that the revised estimates will distribute the funds from Finance to each ministry, department and agency for which agreements have been signed. - JIS photo

The Government will be tabling a Second Supplementary Estimates for fiscal year 2022/23 in early December.

Minister of Finance and the Public Service, Dr Nigel Clarke, said that this is to facilitate the payment of salaries to public-sector workers under the new compensation system by Christmas.

He explained that the revised estimates will distribute the funds from Finance to each ministry, department and agency for which agreements have been signed.

“We're working towards ensuring that persons in groups which have signed [agreements] up to last week Friday (November 18) receive payments of the amounts owed under this new compensation agreement, from the first of April, that those amounts are received in December.

He said that, so far, 15 unions have signed on to the new compensation package.

Discussions continue with the remaining groups, including the Jamaica Teachers' Association and the Jamaica Police Federation.

Clarke was speaking in the House of Representatives on Tuesday, where the First Supplementary Estimates for 2022/23 were approved, reflecting a revised Budget of $971 billion, from the $912 billion originally approved for the financial year.