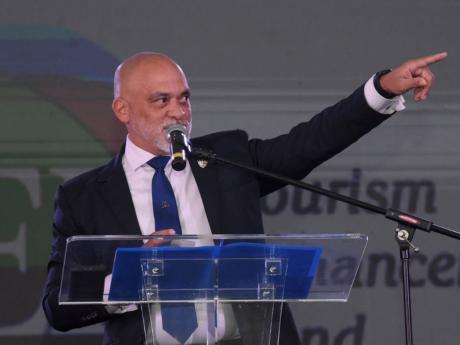 President of the Jamaica Hotel and Tourist Association (JHTA), Robin Russell, is dismissing that he is against more pay for tourism workers.

Russell says when he remarked that caution should be exercised if a policy was to be set to raise wages across the industry, he was making the observation against the realities of the sector.

Speaking at the University of the West Indies, Mona School of Business and Management, Western Jamaica Campus, 'Jamaica Youth Tourism Summit' at the Montego Bay Convention Centre in St James on Thursday, Russell explained that room rates at hotels are set one to two years in advance with industry partners, which means that income earnings are fixed.

He argued that adjustments to wages and salaries have to operate in this context.

“These hotel rates are set and cannot be increased, which means our income is set and predetermined and that is what is budgeted.

“Wages are the largest single expense of any hotel and if we raise those wages indiscriminately, without a raise in income, they [hotel] run the risk of bankrupting not just their individual businesses, but the entire industry,” said the JHTA head.

He suggested that each business look to see how they can increase wages and benefits, while maintaining profitability, against the background of the rising cost of living.

Russell is of the opinion that the sector is being grouped in one big pot, with all operators seen as “big properties”, although the core of the hotel industry remains small properties that have 10-100 rooms.

And these small players, he argued, have just seen the light after the COVID-19 pandemic and any added expenses would hurt them most.

The JHTA president is fearful that the sector will not be able to compete internationally with its biggest competitors, Mexico and the Dominican Republic, whose rates are lower and whose expenses of staffing, utilities and import duties are far less than what obtains in Jamaica.

“So, increasing room rates will only make us less attractive to the market which already perceives us to be expensive, so I say again, caution is needed in this discussion.”

In his presentation, Russell stated that while some persons are moved by instant gratification, true wealth is never achieved quickly or easily.

Instead, he urged the 200 prospective tourism workers at the event to never look at how much money they are making now but to look at what the CEOs and managers at those companies make and work towards that.

“Always strive for excellence and upward advancement and work with those industries like tourism which encourage growth. Hard work is the only way to true sustained wealth.”