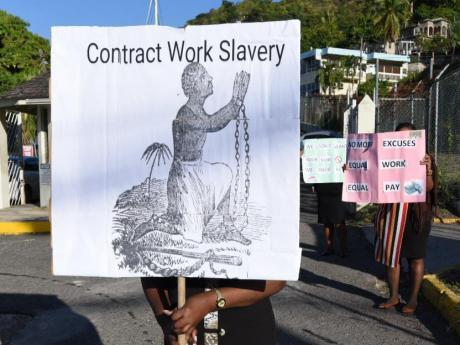 Disgruntled staff of the National Council on Technical, Vocational Education and Training and the Vocational Training Development Institute protest over unresolved issues relating to their employment at the gate of the Gordon Town Road, St Andrew-based campus on January 20, 2022.

Workers at the National Council on Technical and Vocational Education and Training (NCTVET) and the Vocational Training Development Institute (VTDI) have served a 72-hour strike notice on the management and the Ministry of Education.

A release from the National Workers Union (NWU) says workers plan to start industrial action at 6 a.m. on December 6, if longstanding issues are not addressed.

"There will be a withdrawal of labour by our members, including but not limited to a strike," the release said.

"With all attempts at social dialogue having failed, the workers represented by the National Workers Union at the NCTVET and the VTDI are no longer willing to hold strain," it further stated.

The employees have been complaining about pay and contract issues and the NCTVET's transition to the Ministry of Education.

The workers have also said there has been no direction since the recent merger of HEART Trust with National Youth Service, the Apprenticeship Board and the Jamaican Foundation for Lifelong Learning.