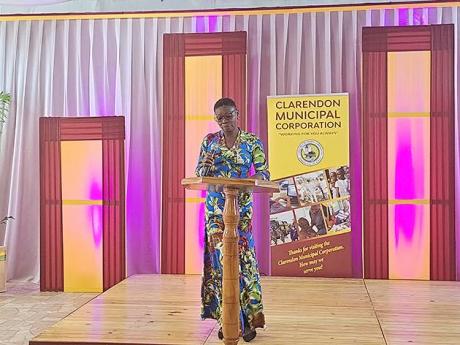 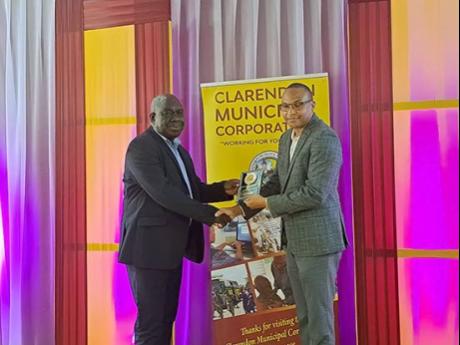 Cecelia Campbell Livingston
Baldvin McKenzie, Clarendon Parish Manager of the Social Development Commission receives an award on behalf of the agency from CEO of the Clarendon Municipal Corporation, Rowhan Blake. 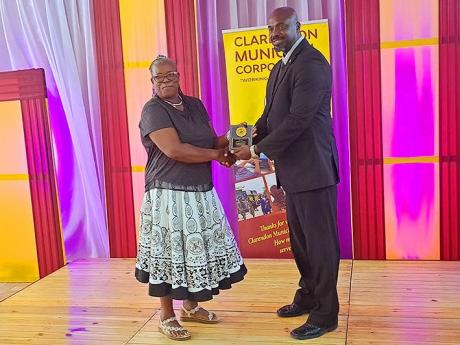 A total of 69 shelter managers were on Wednesday recognised for their service of 15 years and over by the Clarendon Municipal Corporation in a ceremony held at the Wembley Centre for Excellence in the parish.

The event was hosted by the Office of Disaster Preparedness and Emergency Management (ODPEM) in partnership with the Clarendon Municipal Corporation (CMC) under the theme ‘Service with Dignity. Resilience for a Nation’.

Dr. Carby lauded the volunteers for their selfless service and described them as a “special type”.

She gave a brief history of volunteerism in Jamaica which she said grew in momentum with the involvement of the Young Men’s Christian Association (YMCA), Red Cross and service clubs, as well as youth groups.

“It is volunteers who assist with warnings, potential flooding, evacuations, assist community members with special needs. They help in damage assessment, distribution of emergency supplies and perform critical tasks in the shelter of the persons displaced by the disaster, leaving their homes when disaster threatens to ensure that emergency shelters are opened and ready to receive evacuees,” she said.

Marva Morgan, one of the awardees, recalled her early days as a shelter manager operating at Mitchell Town, when she had to send her young daughter to stay with relatives while she prepared to serve. It was not a ‘bed of roses’ she recalled as people were reluctant to come out and when they eventually did, would be disagreeable (miserable).

“Children were crying and I had to try and reassure them that things would be OK. I had to be their mother, and sister,” she said even as she made regular checking on her own child.

Arthur Coleman, another honoree, recalled serving in difficult times with those seeking shelter applying pressure as their requests for food and other supplies were not readily met.

Parish disaster preparedness coordinator at the Clarendon Municipal Corporation, Eleanor Coombs Waithe, praised the team for their commitment and dedication, priceless services, as well as for remaining faithful to the duties and services of shelter management in the parish.

“Our shelter managers are tasked with managing facilities, with the available, but limited resources. Without you carrying out your duties at the respective shelters, without input to the process, imagine what shelter management would be like?”

Some of the awardees are still actively serving, while others have since retired.

There are a total of 94 shelters registered for the parish of Clarendon in 2022.