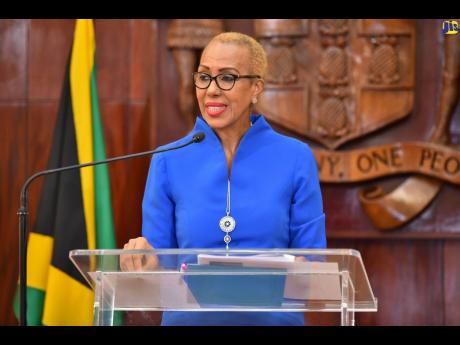 Of the more than 190 recommendations outlined in the Jamaica Education Transformation Commission (JETC) report, the Ministry of Education and Youth is significantly closer in achieving and implementing its 72 priority targets.

The JETC report, which is commonly known as the Patterson Reporting, named after the chairman of the commission, Professor Orlando Patterson, is divided in seven broad thematic areas.

They are governance, administration, leadership and legislation; early childhood education; curriculum, teaching and teacher training; the tertiary sector; TVET (Technical and Vocational Education and Training) in Jamaica; and infrastructure and technology finance.

With the exception of TVET in Jamaica and the financial component, the education ministry has achieved progress in five of the seven areas on this list.

They are currently engaging the ministry of finance and the public service over financing and are anticipating a report outlining recommendations in the field of TVET.

The implementation plan seeks to take into consideration the listed recommendations and put them into action so as to improve the education sector.

Chairman of the ETOC, Dr Adriann Stokes, in his remarks, had called on the ministry to increase the pace at whichit it was working to execute some of the major targets.

The creation of a specialised unit with the Education Ministry to concentrate on the transformation efforts, the hiring of a project lead, the finalisation of a communication plan, and its execution were among the areas he listed as needing to be completed quickly.

Another area he included was the hiring of the chief transformation officer to drive daily execution of key initiatives.

“These are all material things that are lagging,” he said.

“We really should be moving heaven and Earth to ensure that the recommendations are implemented in a timely manner and also a sustainable manner,” he added.

In her progress report, Dwyer stated that the ministry was in the process of the recruitment of a project lead who is expected to be in place by December 16.

“In addition to that, we have identified an administrative person to be on our interim team, a communications strategist to be on the team and so there should be full support by January of 2023 for the work that is to come,” she said.

“We are working on these things because we have to change the architecture of the ministry in order to get us to where we want to go,” she said.

Dwyer further noted that that workshops were scheduled for the following week by the Mona School of Business and Management consulting division, which has been recruited to help the government finalise the implementation.

The education ministry is anticipating that the overall plan, which includes financing, monitoring and evaluation, will be delivered by the end of February next year.

Education Minister Fayval Williams, in her presentation, spoke to, among other things, the advancement of the ministry’s efforts in tackling the investments in the overall infrastructural and technological developments and upgrading of schools needed across Jamaica and the need for licensing of the teachers through the Jamaica Teacher’s Council.

She also disclosed that the value-added procedure is being used with 150 schools as part of the recommendation that all secondary schools be evaluated and ranked using it as a supplement to the traditional evaluation of the national education inspectorate (NEI). Reports for the periods of 2021 to 2022 and 2022 to 2023 will be made available soon.

According to Williams, a company has been hired to operate the education management information system (EMIS) so that data can be gathered and obtained with ease.

She continued by saying that data collection sessions were taking place and that an oversight committee had been formed in November.

Addressing the recommendation which speaks to the reform of the ministry’s funding model for primary and secondary schools to enhance equity, Williams explained that “currently, the way our schools are funded, it is on a per-capita basis, meaning a per-student basis. So, each school regardless of where you are on the spectrum, if you are a school that is way out performing you are going to get the same per capita amount as a school that’s underperforming”.

She noted that the ministry has started to look at the work towards accomplishing this target but that they were not a point to disclose a new formula to be implemented “but serious work is going on,” she said.

Williams said that additional monitoring tools have been created as part of the improving the monitoring approach to curriculum implementation recommendation.

Two reports produced as part of the quarterly reporting on monitoring progress highlighted that 248 schools were underperforming and had been specifically targetted under the framework for school reform.

“I want to say to Jamaicans, we have no shortage of data in the ministry. We know down to the level of the child who is underperforming, who is outperforming [but] what we have not been good at over the years is that hand-holding for that child that really needs it,” she said, noting that the ministry needed to commence individualised learning for such children.