Golding calls for end to discrimination of disabled community 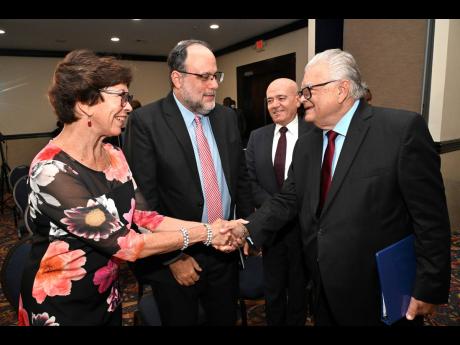 Rudolph Brown
Karl Samuda (right), minister of labour and social security, with responsibility for Persons with Disabilities, greets Sonita Morin-Abrahams (left), chairman of RISE Life Management Services, as Mark Golding (second left), leader of the Opposition, and Aniceto Rodriguez (second right), head of cooperation, Delegation of the European Union to Jamaica, Belize, Turks and Caicos lslands, Bahamas and The Cayman lslands, look on following the launch of the media campaign at The Jamaica Pegasus hotel in New Kingston, on Thursday, December 1.

Opposition leader, Mark Golding, is lamenting that Jamaica still has barriers that exclude people living with disabilities some nine months after the Disabilities Act became effective.

“It’s fair to say that Jamaica has not seen sufficient progress over the years, despite us being joint first signatories to the UN Convention on the Rights of Persons with disabilities in March 2007,” Golding stated as he laid out his arguments at the launch of the media campaign ‘Enabling Opportunities for Persons with Disabilities’ last Thursday at The Jamaica Pegasus hotel in New Kingston.

“There is a long journey ahead of us, as we seek to make Jamaica a society where everything that is practically possible is done to eliminate stigmatisation, provide practical access, deepen inclusion across the society and create opportunities for persons with disabilities,” he said.

The Disabilities Act became effective on Valentine’s Day, February 14. This followed the act’s approval in 2014 and the affirmation of the Disabilities Regulations in 2021. The act makes provisions to safeguard and enhance the welfare of persons with disabilities across Jamaica.

Golding said that when the Disabilities Act came into effect, it brought with it an institutional framework to operationalise the UN Convention here in Jamaica, “but still so much work remains to be done to bring tangible benefits to the disabled community”.

He welcomed the media campaign as indeed timely and essential to focus on the status and realities faced by the community of persons with disabilities.

He pressed his point with references from Senator Floyd Morris’ recently launched book which details how persons with disabilities face obstacles in society. Senator Morris is visually challenged.

“Dr. Morris makes this critical point as to the nature of exclusion, and I quote, ‘It is individuals in society that set the exclusion or inclusion criteria for knowledge and understanding of a society. Variably, persons with disabilities are restricted due to the diverse barriers that are placed in their pathways by non-disabled individuals’,” Golding read.

Golding said Jamaicans continue to label and discriminate against persons living with disabilities.

Golding said he has a strong personal interest in this subject, given that he grew up in a household where both of his parents devoted their careers to improving the lives of persons with disabilities in Jamaica.

The Mona Rehabilitation Centre, the most significant centre for persons with disabilities, was renamed in honour of his deceased father, the late Professor Sir John Golding.

He says the media campaign is a pathway to promote high-quality skills training and learning for disabled persons in Jamaica.

“It is my hope that this project will enable opportunities for persons with disabilities, and will make strides forward in building awareness and momentum in the struggle to end discrimination in all its forms,” he said.

He commended and thanked the EU for its funding and interest in the matter and their local partner, RISE Life Management Services.

Aniceto Rodriguez, head of cooperation, EU in Jamaica said the EU remains committed to raising awareness of the living conditions of persons with disabilities, the challenges they encounter in everyday life and support tools that can improve it.

“This is a unique opportunity to renew and step up the European Union’s commitment to promote the rights and well-being of persons with disabilities,” Rodriguez said.

“This commitment is important especially because one in seven people in the European Union has a disability and this number is said to increase due to the ageing population and rising prevalence of chronic conditions.”