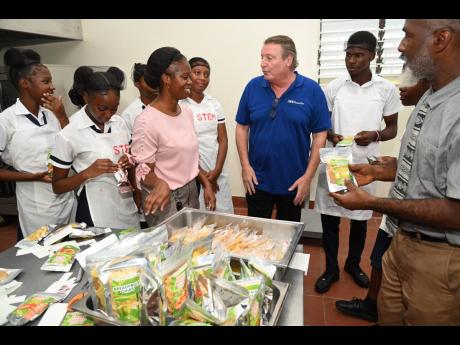 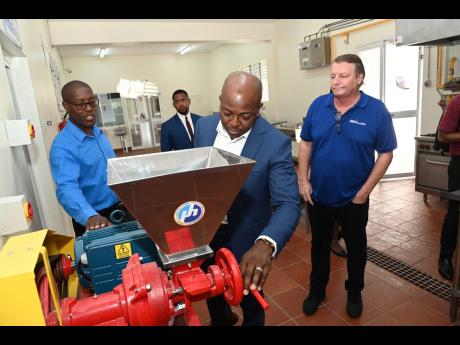 Agricultural resilience building has been laid squarely into the hands of Sydney Pagon STEM Academy in St. Elizabeth, under a special memorandum of understanding with J Wray and Nephew Foundation (JWNF).

The Foundation turned over its $47 million Elim Agro-Processing Plant, which it unveiled in April this year, to the Science, Technology, Engineering and Mathematics institution on Wednesday afternoon.

However, while the school will take over the management of the facility, JWNF will continue to support the maintenance and continued upgrading of the plant to reach best standards and industry best practices.

Lauding the move, the minister of agriculture and fisheries, Pearnel Charles Jr., said in order for the sector to provide consistency, high quality, all the time, all year around, but to do so, resilience has to be built in the structure and infrastructure, in the human resources and the capacity to produce.

“More importantly to produce value-added products,” he told the management team tasked with transforming a community that for years depended on the sugar industry for their livelihood.

“The 40-odd million dollar investment being made in the processing plant is a significant element. It is going to allow for youngsters at Sydney Pagon and in this community to be exposed to the training which we know is going to urge them and challenge them to become even more creative than they are already,” he stated.

The 2,200-square-foot facility was built by the JWN Foundation following the closure of the Appleton Estates Sugar Factory in 2020. The Foundation deemed it fit to continue to support the parish’s farmers, who now have the opportunity to offer value-added products on top of their primary crop production.

Charles further issued a call for every Jamaican citizen to play their role in the movement towards food security, and reduce post-harvest losses and the country’s import bill, even while tagging the project one that is aligned with the ‘Grow Smart, Eat Smart’ strategy, that his ministry is advancing.

For his part, chairman of the Foundation and managing director of J Wray and Nephew, Jean-Philippe Beyer, said they understood and firmly believed that the economic empowerment of communities was key to their positive development.

“While we had no choice, unfortunately, but to close the sugar factory, we also wanted to ensure that the community would have the opportunity to producing more financially viable products that came and create a marketable and profitable product,” Beyer said.

“I am pleased to be back here seven months later with you and to confirm that we have delivered on our promises, and that we are ready to sign this memorandum of understanding. We are confident that they will ensure that the plant becomes not only economically sustainable, but in addition to the community, but an economic success and probably an inspiration to other communities to show what can be done,” Beyer added.

The agro-processing plant can dry, mill, package and store, using its state-of-the-art equipment. A full solar system with enough battery storage to support the operation of the entire plant has also been installed. The Foundation has also hired Trevor Cameron, who is not only known to the community, but has a wealth of experience, including being a former member of the J Wray and Nephew team. Cameron, Beyer said, has been responsible for getting the plant up and running.

The Foundation chair indicated that as part of this effort to ensure sustainability, they are also in discussions with the tourism sector to purchase products. “Interested persons are really waiting for us now to be able to come up and tell us exactly what we can produce, into what quantities as soon as possible,” he said.

Farmers have been taking their crops and that are being processed turn them into chips and other products via baking and frying, as well as transitioning some crops, such as breadfruit, sweet potato and more, into powders and flour. The facility also has the means to mass-produce coconut oil.

Students pursuing agro-processing at Sydney Pagon STEM Academy also have the opportunity for level-3 certification at the NCTVET level.