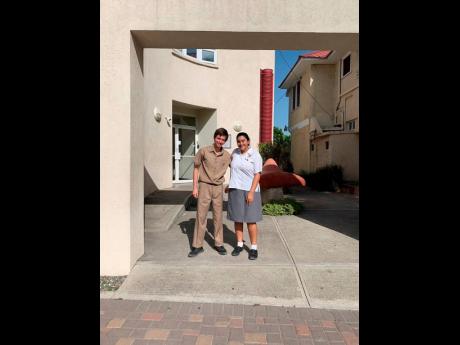 Contributed
Rhys Greenland, community outreach manager, and Jordan Nakash, programme manager for UniCycle Jamaica, take a break at Campion College, where they are both students.

Following the success of their launch last year, which saw over 300 khaki uniforms being donated to several high schools across Jamaica, a group of Campion College students are once again calling on Jamaicans to donate gently worn khaki school uniforms to schools in need.

UniCycle Jamaica is a school uniform-recycling initiative whose mission is to collect gently used khaki uniforms and redistribute them to students in need, free of charge. The initial objective was to provide boys with multiple sets of khakis.

“At Campion College, the Guidance Department has a programme in which they collect khakis from students at the end of each term. The items collected are then distributed to students in need. Last year, they had more than they needed and parents still wanted to donate rather than discard their uniforms. Jordan then suggested that it would be a good idea to collect and distribute to needy students in other schools,” said Zein Issa Nakash, Jordan’s mother.

Jordan Nakash is a sixth-form student at Campion College and progamme manager of UniCycle Jamaica. Based on the response from the beneficiaries last year, he and the team decided to continue their efforts in helping other needy students. “What was encouraging was that some schools and individuals reached out to Unicycle for assistance,” Nakash said.

“This is an opportunity for parents of high-school boys to get involved and bridge a gap in our community. There are many inner-city high schools where boys have only one set of khakis that has to be washed daily in order to have a clean uniform each day. We would like to alleviate that problem,” he added.

This year, Fontana Pharmacy has joined forces with UniCycle, and so khakis can be dropped at Campion College or any Fontana Pharmacy islandwide. “The UniCycle initiative is a great idea. It exemplifies the patriotic spirit of national-minded individuals who are clearly interested in helping youth and building our country. Donating gently used items to help others is a modern mindset that we acknowledge, and we encourage others to follow suit,” said Kevin O’Brien Chang, chairman, Fontana Limited.

Wisynco Eco has also come on board with the donation of receptacles that will be used to collect the uniforms at the various locations. Nakash is optimistic that other corporate sponsors will become involved in the programme.

“Last year, Ralaica Trading Company Limited donated uniforms to us and we are hopeful that this year others will be so moved to assist us,” Nakash said.

The contributions will be sorted and crests removed before distribution to other schools. “Many schools have reached out to UniCycle indicating their need, and other schools will be identified in collaboration with the Ministry of Education, Youth and Information, who have endorsed the project,” added Rhys Greenland, community outreach director for UniCycle.

Support UniCycle by donating your gently used uniforms from any school, with or without crests, to any of the drop off locations.

For further information, contact unicyclejamaica@gmail.com and collection can be arranged.