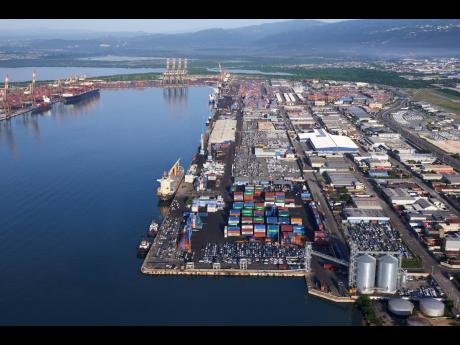 Contributed
An aerial view of the wharves in Kingston.

Kingston Wharves Limited (KWL) has increased its capacity to safeguard cargo integrity at its terminal.

The company, in its annual report, said it is employing stringent security protocols and policies to protect its interests.

“As the trade in contraband threatens the maritime industry, safeguarding the integrity of legitimate cargo is an imperative for international ports and other shipping interests,” Kingston Wharves Limited stated.

What’s more, KWL shared that it is expanding the use of modern technology and collaborating with local and regional law-enforcement entities in its prioritisation of security.

This has been reinforced by Security Administrators Limited – a KWL subsidiary that provides industrial and port security – which formed a relationship with Jamaica Customs, the Port Authority of Jamaica (PAJ), private security firms and the Jamaica Constabulary Force to bolster security.

Last year, the terminal, along with the PAJ, also injected capital into its security networks, including its close-circuit television system, as it moved to keep pace with technological developments and stay ahead of those engaged in illicit cargo trade.

KWL added: “Our surveillance command centre was relocated, expanded and outfitted with state-of-the-art-equipment to strengthen our operations as part of the port of Kingston’s robust security framework.”

The 75-year-old company will broadcast its annual general meeting to shareholders from its Newport West head office on June 17.