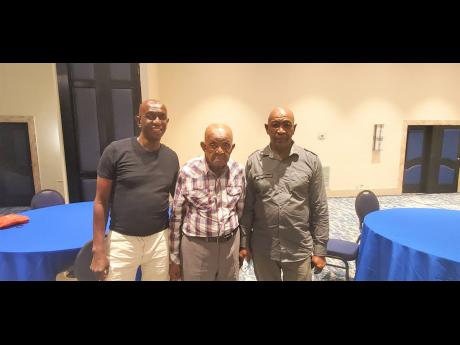 Contributed
The late Samuel Anderson (centre) with his sons David (right) and Delroy.

Samuel Anderson dedicated his life to the shipping industry, spending over three decades working at the port of Kingston. Little did Anderson know that his spell there would make him the forerunner of his family’s involvement which spans three generations.

Sadly, the 97-year-old will not see this feature today, passing on Monday, September 27, just four days after sharing the remarkable story of his almost 40-year stint as a port worker with the Shipping Association of Jamaica (SAJ).

Anderson worked the port at a time when manual labour was the order of the day. From the early 1960s when he began to 1989 when he retired, he remembered the period as “very good,” adding that “those days was hard, but no complaints”.

He shared, “We had to lift up (cargo), but those days different from these days now,” noting that the modernisation of the port has made it “long time better”.

Samuels’ time at the port paved the way for two other generations of Anderson men, including two children and a grandson, to enjoy careers there.

David Anderson, 62, followed in his father’s footsteps when he began as a casual worker at the port in 1980. David would go on to become a registered port worker, helping to load and unload ships as a stevedore, four years later.

“My experience being on the port ... it was good, even though we had some challenges, like day-to-day lifestyle and the condition.” However, he said mechanisation has changed how port workers function. “Technology becomes a part of today lifestyle, where it (is) not that manpowered anymore. Machines become the main priority on the port now.”

David’s two-decade employment at the port would end in 2000, but not before helping his family earn the distinction of having three relatives there at the same time once his younger brother entered the industry in 1982.

Delroy Anderson, 59, took a slightly different route from his father and brother, beginning his port career at A.E. Parnell and Company. It would not be until 2000 that he would join the SAJ as a stevedore, a stint which would last 16 years.

He said while the job was difficult, it became better once he began to look to more senior employees in his field. “You have to try to learn the work because the old boys, in those days, the old boy dem had the key to the work; so you always had to look keenly to gain knowledge ‘cuz every day you come a wharf you gain wisdom to work.”

And those lessons, which he now shares with young port workers, helped him to get through the difficult times. “One of the things you have to observe is to learn the key of the work. You have to carefully abide by the rules and regulations. It is very risky, but you have to have self-control.”

Also speaking to the benefits of working the port, older brother David said education grants from the SAJ assisted him to send his children to school, up until they completed secondary education.

One child would go on to work with the SAJ briefly, as Sheldon Anderson walked the path of his father from 2007 to 2010, before returning abroad to pursue other opportunities.

David’s parting words, much like his late father’s, was the importance of putting family first.

“Everybody go there with an expectation, but over the course people get excited and change dem direction, so you have to just stay focused. If you have a family, that is the main priority and responsibility, not just for yourself, but for your family to come to something out of what you earned from the port.”

Speaking on behalf of the SAJ, CEO Trevor Riley paid tribute to the Anderson family for their service to the association and to the port of Kingston. He also expressed condolences to the family and friends of the late Samuel Anderson.