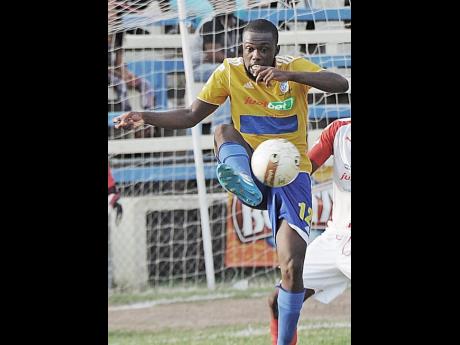 At the start of the Red Stripe Premier League (RSPL) season, not many people had their eyes on Harbour View starlet Ranique Muir, as Jermie Lynch, McKaully Tulloch and John-Ross Edwards were the ones expected to provide the goals for the Stars of the East.

In round one, it was Muir who had been making the headlines and doing the job for the east Kingston club up front, netting six times, three more than any other Harbour View player.

However, they went down 0-2 to Arnett Gardens in their first game of the second round at the Anthony Spaulding Sports Complex on Sunday.

Harbour View are fifth in the table with 19 points, five behind leaders Waterhouse.

The 2011 Under-21 league top scorer has targeted a minimum of 15 goals this season. He is determined to continue scoring goals and working harder to double his goal contribution in the second round.

"I am kind of pleased with my start to the season. I did a lot of hard work in the off-season and I guess it is paying off. I started playing late in October because of the chik-V, but I am currently the leading scorer for the club and that is very pleasing to me.

"The work in the off-season was extra than previous seasons, but I was the leading goalscorer in the Under-21 in 2011, so scoring consistently is not unusual or a surprise to me," the young attacker told The Gleaner.

It has been the striker's richest vein of form since he debuted in the Premier League six season ago.

"We (Harbour View) had a bit of a rough patch at the start of the season and to finish third in the first round is a really big step for us; and it is in us to make the top four in May," he said.

Muir is also hoping that his good form will earn him his first national senior team call-up.

"I have been putting in the work in training, so I am still working towards that first call. I hope to do better than the first round as I got six (goals), and I hope to even double or triple that. So, for the next round, you can look for Ranique Muir scoring more goals," he promised.