‘One of the greatest seasons we’ve ever had’ 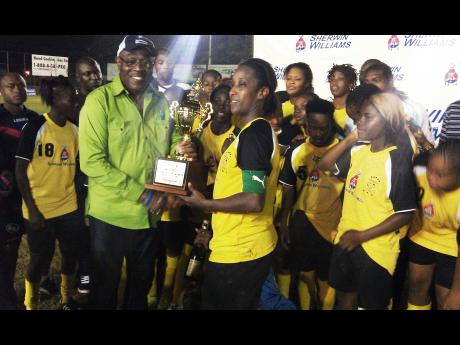 After leading Barbican women to their seventh straight Sherwin Williams Women's League (SWWL) title and 10th overall, as well as taking all other available trophies and staying unbeaten for the last three years, coach Charles Edwards is making a call for all three trophies to be retired to the club after he described as 'fantastic' their unrivalled achievements in local football.

Barbican stopped Arnett Gardens 3-0 at the Drewsland Stadium on Saturday through goals from Davia Smith (50th), Anna-Kaye Smith (own goal) and captain Alecia James (87th) to stretch their unbeaten streak stretching to 2011.

Also, for the third season running, they have won the triple (knockout, mid-season and league titles).

"They should retire all three (trophies) after this. This is a fantastic season, a historic moment. I don't think there is any other team in the history of Jamaica's football that has gone undefeated for so long.

"We conceded just one goal all season, but this run has been going on from 2011, and to be triple champions three years back-to-back is phenomenal. They should give us all of them (trophies) with a golden plaque on it, too," he told The Gleaner.

The decorated coach noted they had a problematic start to their season.

"We started out with a lot of problems. We couldn't train at the field because it was being refurbished, we had to tailor (cut) our training and do things a lot differently, but these girls are true champions, they are a cut above the other teams, and this is one of the greatest seasons we've ever had, and it has been one of the best seasons of coaching football ever in my life," he said.

Arnett held the champions goalless until the break. But after Smith broke the deadlock, it was clear there was going to be only one winner.

"Arnett is never a fit team, we worked them out, we knew what they were coming with, and we knew how to play them, so I knew going into the second half they wouldn't be able to match strides with us for the entire 45 minutes, and it showed," he added.

"Give these girls credit; it's the first time they are reaching the major final. But the discipline and the concentration went down, and the own-goal killed us," said Waite.