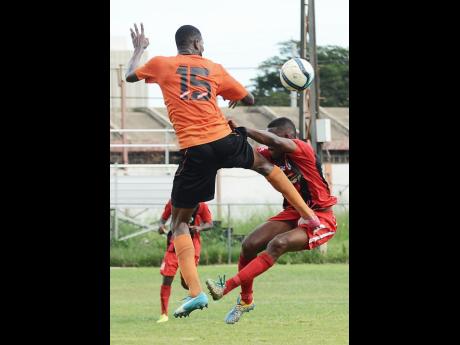 Montego Bay took the lead just nine minutes into the contest after Keneil Kirlew was brought down inside the penalty area, and Lesley St. Fleur stepped up to score the resultant spot kick, his third goal in two games.

However, Boys' Town drew level through their top scorer, Rafiek Thomas, after 30 minutes, and then had a great opportunity to turn the game on its head with seven minutes remaining when Keyes' goal-bound effort was blocked by a defender's hand in the box.

The striker (Keyes) then demanded to take his own spot kick, but produced a tame effort that was easily swatted away by Barrett, to keep the scores level. Price was left cursing his luck as it was a glorious chance missed to step up out of the bottom two.

"Yes, it is definitely (two points lost). This sport can be very ungrateful. We put in a lot of industry and did enough and should have come away with three points. Getting that penalty in the last 10 minutes, we should put away that chance and get the three points, but we will dig in and continue to fight,"he said.

MoBay's coach, Carlos Garcia, said although his team played a conservative game, their intention is always to get full points.

"We tried to full the middle to win the ball and dominate, but, in my opinion, I think we scored too early, and after that ,we just played bad; until Boys' Town scored, we came back into the game. We always want to win, but a point is a happy result," he said.

The result kept MoBay second in the standings with 26 points, two behind Waterhouse, who drew 1-1 with Humble Lion in yesterday's late game. Boys' Town remain at the foot of the table, tied on 12 points with Humble Lion, one point less than Barbican, who will tackle Cavalier in tonight's match.