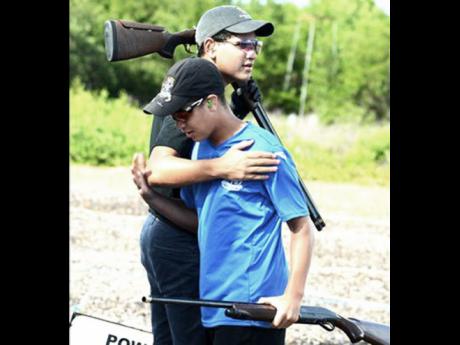 file Nicholai Clarke (front) is congratulated by Chad Zaidie for being the overall winner at the recent Digicel Cup 2014 Inter-school Clay Challenge held at the Portmore Range.

Fast-rising sporting clay star, Nicholai Clarke, who displayed remarkable composure and focus to top an impressive field for the champion boy title at the recent Digicel high school skeet competition, told The Gleaner that he never thought he would win the championship and that just reaching the Super Six was his target.

However, his success has greatly boosted his confidence and he is not only aiming for more victories in 2015, but also wants to achieve A-class status before he exits high school in a few years.

'I didn't really think I would come out on top. My aim was to reach the Super Six and win my class and that I did, but I didn't think I would win the overall competition. But it has given me a lot confidence and I think if I follow the right path I can continue to become better.

"I want to continue to win tournaments and shoot at the highest level I can, and I hope to reach A-class in the senior, although I am not really in any rush as I am in school now but I would like to reach there before I finish high school," the 14-year-old told The Gleaner.

Clarke was an average shooter when he started the sport as a 12-year-old two years ago. However, with dedicated practice and guidance and encouragement from National Skeet Club coach, Khaleel Azan, and fellow young shooter, Nicholas Chen, his accuracy rapidly improved.

But his full potential was not realised until the PWD winter tournament last month, where he won the junior and C class and finished third behind Errol and Geoffrey Ziadie with an impressive 89, a score which could have earned him a shoot-off for the A-class title.

A week later at the high school championship, the Hillel Academy student continued where he left off and outgunned his peers to take the individual honour and he revealed that competing with seniors and developing his concentration helped him take his shooting to the next level.

'I was an average shooter but then I started practising shooting on Fridays. Then I started participating in the senior tournaments and as time went on I got better and better. But I had a problem at the beginning of shoots I would drop a few birds but uncle Khaleel told me to visualise and make sure I see it in my head before I shoot.

"Playing in the senior competitions has really helped me because I got to see certain shots when I am in the field and Uncle Khaleel really helped me along with my fellow shooter Nicholas Chen and would mentor me between stations when I am having problems," Clarke who also has a passion for football pointed out.

Meanwhile, Nicholai's mother, Fiona Clarke, noted that shooting has, in general, had a positive impact on her son's life and believes if he continues on the same path he could become the first Jamaican skeet shooter to participate in the Olympics..

"Over the two years, he has definitely improved not just in shooting, but in his discipline towards other aspects of his life mostly his school work. He takes things a lot more seriously and has moved from a young man who felt that he couldn't, to now know that he can and he puts in the effort, and I think if he continues along that line he could go on to greater and higher things.

"His practice and lessons have carried him this far and I think it will carry him further. Mr Azan has hopes of one day taking a Jamaican to the Olympics and it is very possible (for Nicholai), but it will take dedication and lots of focus and concentration," she said..