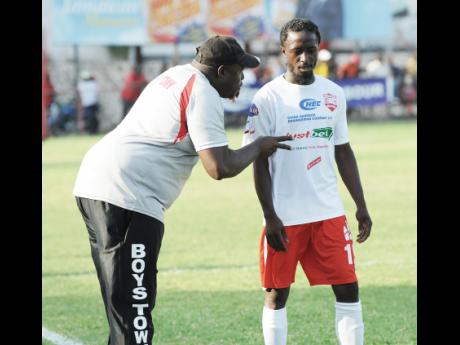 Boys' Town's 17-year-old striker Shamar Nicholson continues to add to his growing reputation, taking leave from the national Under-20 camp to score a double in Boys' Town's 4-2 win over rivals Arnett Gardens in the quarter-finals of the KSAFA/Jackie Bell competition at the Anthony Spaulding Sports Complex on Wednesday.

The Trench Town schoolboy followed up Rafiek Thomas' seventh-minute opener with his sixth and seventh goals in all competitions in the first season of top-flight football, in the 32nd and 53rd minute respectively. Substitute, Peter Keyes, sealed the win in the second minute of added time.

The youngster, who was not selected in the 20-man Under-20 squad that travelled the Venezuela for a three match friendly tournament, is on a mission to make the final cut in January and, on Wednesday, he came to make a statement and did.

"I was with the Under-20 team, but I never got picked for the final squad that went to Venezuela. But that only encouraged me to work harder. When the names are called for the Under-20 side in January, I am going to be on the starting eleven," he boldly declared.

The teenager, who scored on his Premier League debut, missed the first three games of the Premier League second round due to his national commitments, but with his growing confidence, he has no doubt that he will continue to score goals, and that Boys' Town will survive relegation from the Premier League. He also believes they can go all the way in the corporate area knockout competition.

"This is my first game since the second round. I didn't play the first three games because I was at camp. I go back to camp tomorrow (Thursday), but to score two goals, I am very proud of myself. I have seven goals overall now, but I was nervous a little bit at the start (of season), but the more and more I played, it built my confidence."

Meanwhile, Arnett Gardens coach Jerome Waite was left cursing his team's luck after the wasted two penalties to tie the game after coming from 3-0 down to 3-2. Andrew Phang and veteran Kevin 'Pele' Wilson both missed from the spot late on, after which Keyes scored to put the game beyond reach.

"The effort wasn't a bad one, but luck wasn't on our side today," Waite said afterwards

But while Boys' Town coach Andrew Price thought the two penalties were soft, he believes it could be a milestone victory for his side.

"We are still a work in progress, and the best is still to come from Boys' Town. This is a good Arnett Gardens team that is doing very well in the league, and what my team needs to do is start believing in themselves and start playing some good football as they showed here today," he said.