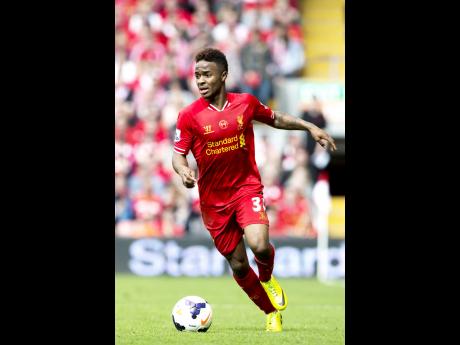 Jamaica-born Liverpool winger Raheem Sterling received one of the most prestigious awards in European football at the weekend after he was crowned the best young player on the continent.

The England midfielder, who turned 20 on December 8, was named Europe's Golden Boy for his dazzling performances for club and country (England) in 2014.

The annual prize, which is voted on by journalists across the continent, is presented to the best player under age 21 in top-flight football on the continent. It is a massive award, with the list of former winners being some of

the continent's most promising young talents who have gone on to have exceptional careers.

Some of the former winners of the accolade include world stars such as Lionel Messi, Cesc Fabregas, Sergio Ag¸ero and Mario Goetze, while last season's winner was Juventus and France prodigy, Paul Pogba. However, it is only the second time an English player has received the honour, Wayne Rooney being the first.

The youngster, who was presented with the trophy prior to the kick-off of the Liverpool-Arsenal game at Anfield yesterday, was overwhelmed after claiming the award and took to his club's website and Twitter to express his delight.

On Liverpool's website, he commented: "It's a great achievement to win such an award. It's a really happy feeling for me and my family. Something I've always wanted to do is to work hard playing football and try to be recognised."

While on Twitter where he also posted a picture of himself with the award, he philosophically stated: "Walk boldly through the doors God opens for you, and don't become discouraged when he closes one."