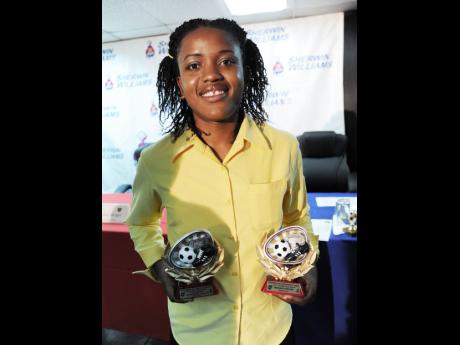 Barbican's pursuit for a seventh straight Sherwin Williams Women's Premier League (SWWPL) title and 10th overall, and their ambition to retain the three available trophies (league, knockout and mid-season titles) for a third successive season were led by the striking prowess of goalscoring ace, Tashanna Vincent.

Vincent made her career at Portmore Strikers before moving to her rivals last season.

With the departure of Jody Ann McGregor to UWI, the bow-legged Vincent has handled the mantle as the team's main goal-getter and it's an opportunity she has taken with both feet, netting 29 goals and leading the team to a successful defence of their three titles.

The talented player netted 11 of her team's 27 goals to help defend the Sherwin Williams Colourscope KO title, and in the league she scored 18 of their 64 goals.

Despite her immense contribution (goals) in helping Barbican to repeat the three-peat for a third consecutive time, the star striker insists that it's Barbican and coach Charles Edwards who have helped her and not the other way around.

"This (award) means a lot because my (broken) foot was in a cast from April to June. So I was doubting if I would come back and perform to my optimum. But I chatted with coach (Edwards) and 'Jackie' (Patrick) Walters, who has been my mentor since I was 15-years-old, and that gave me the motivation to go out and push."

Vincent declared that Barbican Football Club and Edwards have not only made her a better player, but a better person.

"The last time Charles Edwards coached me, I was named Caribbean Footballer of the Year, so I knew working with him would mean success. He asked me one favour, and that was to allow him to coach me, which I allowed him to. He pushes us to the limit and I want to thank him. I am not only a better player, but also a better person because of Charles Edwards," she stated.

The 27-year-old is looking to play out the next few seasons with Barbican before making the transition to coaching, a career she has already started.

"Hopefully, I can transfer everything that I have learnt into coaching, because I am hoping one day to pass on whatever I've learnt to young talent, boys and girls. I have already started coaching seven to 12-years-olds at Ballaz International. So I am going to be working with footballers until I stop playing and then I will take it (coaching) up full time," she said.