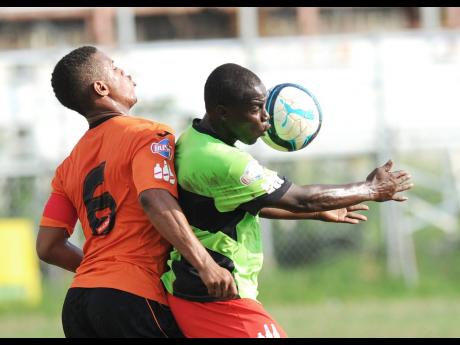 Ricardo Makyn
Ricardo Makyn/Staff Photographer Humble Lion's Devon Hodges controls the ball on his chest as he is challenged from behind by Tivoli Gardens' Ranike Anderson, during the Red Stripe Premier League football encounter at Edward Seaga Sports Complex on Sunday, December 12.

Hodges' sterling performances also earned him the tournament's Most Valuable Player award at the end of the season.

In the summer, Hodges made the switch from Spanish Town to May Pen. However, his high-profile move to Humble Lion has not gone exactly as planned because a thigh injury sustained in the off-season, followed by a knee problem early in the league campaign, has kept the prolific marksman on the sidelines for most parts.

"My situation is that I started the season with an injury. After I got over that, two matches later, I got a knee injury. Now it has been a while since I have gotten over those injuries, and now I am getting fit again," Hodges said.

But after scoring two goals in his last two games, his latest a composed finish after 39 minutes in his team's 1-0 win over Cavalier at Stadium East on Sunday, the 30-year-old forward told The Gleaner that he is just getting back to full fitness and, as a result, the goals are starting to come again. And while his desire to score goals is as strong as ever, Hodges declares that his main intention is to get things right with his new club and help them get into the top four.

"Over the past weeks I have been working hard, even over the holidays I have continued working, as I am just trying to get it right for my team, because I am at a new team, and I have to establish what I did over the years and bring it into this season. But you know Devon Hodges - once I start (scoring), I am consistent and I never stop, so I just have to continue the work and try to keep my focus, keep the fitness and the discipline and eventually it (scoring form) will return," the many-times Premier League Golden Boot winner declared.

He expressed a hope of breaking the league's scoring record prior to the start of the season, but injury put paid to that plan. Still, he wants to score heavily and lift his team.

"The aim was to break the record (for most goals in a season), but with the injuries, that might not be possible now, but maybe I can get about 15 or 16 (goals), nobody is at 16 as yet. But I just want to see my team into the top four for the third round, that's all I really want, so hopefully, we can have a better run towards the end of the season," he said.

Sunday's victory over Cavalier was Humble Lion's second in four games unbeaten, and they jumped three places to ninth with 16 points (though only ahead of Boys' Town on goal difference), their highest position this season.

Hodges, who is now the team's leading scorer with three goals, believes things are coming together for them.

"We have a good team with a lot of good past national players, and the team is getting fit and gelling together," the burly and experienced former national striker said. "We just have to maintain our discipline, work hard in training and eventually we will get it right. For the past four matches we have not lost, and that is a plus for the team."