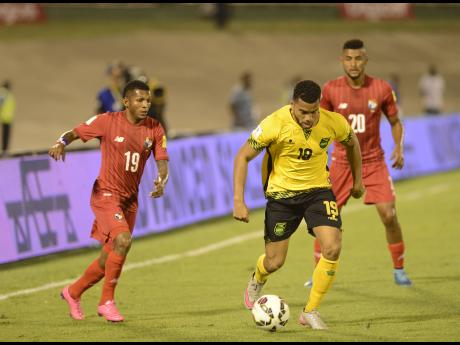 Jamaica were trailing Panama by a goal to nil in the semi-final World Cup qualifier at the National Stadium.

In a mediocre first-half the visitors dominated possession and were more dangerous throughout the period.

It took the Jamaicans 23 minutes to muster their first attack, which produced no real threat.

However, six minutes later on their second attack of the game, they thought they went ahead when Darren Mattock deflected Adrian Marriappa’s shot past Jose Calderon in goal.

But Mattock was ruled offside.

The Panamanians, however, continue to look more dangerous and in the 34th Adolfo Marchado headed over from a long throw.

Three minutes after Perez broke through again, but Wes Morgan was their to snuffed his shot.

A minute later goalkeeper Duwayne Kerr had to go full stretch to stop Filipe Baloy’s header from a corner.

But the visitors were not to be denied and they eventually went ahead on 42 minutes when Armando Cooper free-kick deceived Kerr and flew into the far-post, to take a 1-0 lead at the break.