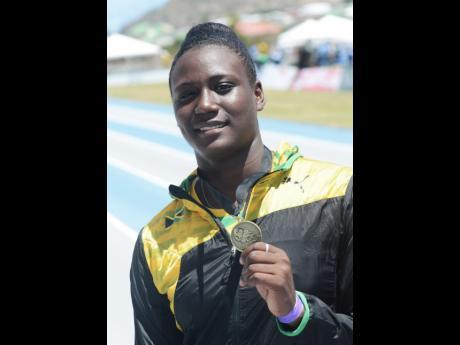 File Photo
In this 2015 file photo, Sahjay Stevens shows off a medal won at the Carifta Games.

The stoutly-built Stevens won the girls Javlin with a throw of 43.60m.

Devia Brown from Hydel was second with a mark 42.52m while Tyefah Saunders from Immaculate took home the bronze with a throw 38.59m.

Meanwhile, after seven finals on the girls' side, Edwin Allen lead with 47 points ahead of Hydel with 40, Excelsior on 26, Holmwood on 26 and St Jago on 23.

In the boys' section Kingston College lead with 41 points followed by Jamaica College on 39.5, defending champions Calabar on 28.5, Petersfield on 28, St Jago with 24.