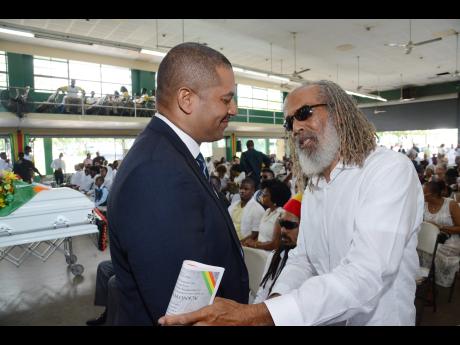 Allan Cole Jr, son of legendary Jamaican footballer Allan 'Skill' Cole, was remembered as a loving and caring individual who inspired and influenced the lives of all he came across in a positive way.

His father, Allan Sr, who could not hold back tears, described his son as an unusual human being. "He was connected to everybody. He was never upset by anything. Such a good youth. He really made me proud. I have to say he was an unusual human being. He loved everybody and was very caring. A father for all - nephews, nieces, everyone. I don't know when this pain is going to end," the iconic former player told The Gleaner.

Allie McNab, close friend of both father and son, said that Cole was "gone too soon". "He was a caring and loving individual. Very charismatic and one of the most popular kids. He had such an impact on his teammates that they didn't allow him to carry his bag," he said.

His teammate from the winning Manning Cup team of 1989, and Jamaican football idol, Walter Boyd, said that being around Allan Cole Jr at a tender age had a major influence on his football life and career.

"He was a nice and loving person," Boyd said. "(He was) very easy to deal with and he really embodies the word captain to the fullest. It was an honour to be around and to be able to share some moments with one of the greatest, who truly loved the sport with a passion. His father is blessed to have produced a beautiful person like that," he commented.

The funeral was conducted by the Ethiopian Orthodox Church, given that Cole Sr and Jr are Rastafarians. The service lasted nearly three hours, with the majority of the mourners dressed in white. With Cole's widow being Stephanie Marley, it meant that the Marley family was also represented by Daneisha Prendergast, Serita Marley, and others.

There were also musical tributes from Ken Boothe, Freddie McGregor, and Kevin Downswell. Cole, who was 46 years old, is survived by widow Stephanie and nine children.