McCallum: I'll give it my best shot! 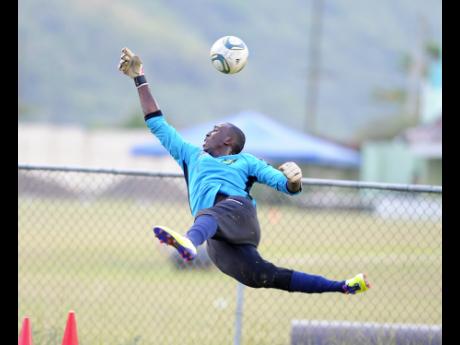 Waterhouse FC goalkeeper Richard 'Spoon' McCallum surprised many when he made an about turn at the start of the Red Stripe Premier League (RSPL) season and came out of retirement to get back between the posts for the Drewsland-based club.

The former national goalkeeper told The Gleaner that being so close to the team, because of his daily responsibilities as club general secretary rekindled his desire to play again.

"In the preparation leading up to this season, I was very close with the team and, being the general secretary, I was very involved," McCallum said. "So hanging around the youngsters and feeling their energy, I wanted to play a more integral role and to help

the thrust to win the championship," he added.

"I had discussions with the technical team and executive body, and we made a decision that I'll get back as a player, probably not full-time. But let's see where it goes based on my performance and how the body feels," he added.

Since coming back into the team, the response has been overwhelming, and he was also reappointed team captain after Nicholy Finlayson was stripped of the armband.

"The response from the youngsters was very positive and I got calls from members of the community, who were excited about me playing in the team. It feels good, it's a joy for me. I enjoy playing. It was just unfortunate that due to personal reasons I retired early, but that is behind me. I am here and I will give it my best shot," he said.

Meanwhile, the 33-year-old says it's difficult juggling his other responsibilities as general secretary with playing full-time, but insists he feels good to be back and expects to be around for another two to three seasons.

"I get involved in every operation, operationally or administratively. I do train every day like a normal player. When I am not training, I am in the office coordinating events and every activity for the club, the players and the technical team, so it is challenging.

"I have been out two years, but not inactive. I feel good. I feel I can go on for another two or three seasons, depending on how the body feels and what the family is doing, but I am here to stay," he said.