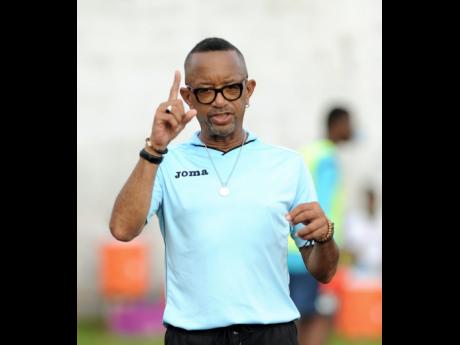 St George's College are far from the usual attractive, attacking team this season. The Neville Bell-coached team has laboured through the ISSA-FLOW Manning Cup season so far in uncharacteristic fashion, relying strongly on defence.

Bell has admitted that they are not the most fancied team and they might not be having their way this season, but he believes he has a team of fighters that will battle to the end.

"We want to win, and we want to dominate (games), but that does not always happen. Sometimes even Arsenal and Manchester win one week and then lose the next week. This is a schoolboy league. To win, you have to get almost everything right ... . It is not easy to win," he said.

Bell said the point shared with St Catherine on Tuesday was disappointing, but he was still happy to come away with something.

"Sometimes I leave disappointed that I didn't get all three points, but sometimes I am a little happy knowing that at least I got one out of the three."

He added that the team needs to improve all around to truly challenge for titles this year. However, he expects St George's to put up a challenge against any opponent they face.

"We have made some changes this year because of personnel, and I don't think we have got it right yet. Usually, I tell them it takes 10 games to get it right, but we haven't got it right yet. But these youngsters are fighters, and I know they will continue to fight to the end," he said.