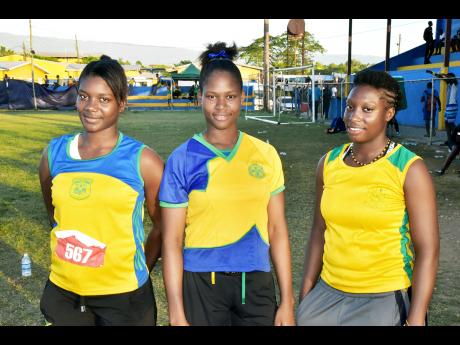 Kavarly Arnold
Keliesha Shaw (left) and her twin sister Aliesha (centre) were two members of the Rusea's High School team, which topped the Western Championships. Keliesha won the Class One girls with Aliesha second. At right is Deon Burley, of Petersfield High, who was third.

Rusea's High, a school better known for its exploits in football, has been turning heads in track and field recently. After their back-to-back wins at the Western Championships, the Hanover-based school, is now looking to make its mark on the national level.

Rusea's girls scored 388.25 points to top the Western champs, 80 more than second place and previous 10-time winners St Elizabeth Technical High (STETHS), and after taking 13 points for a historic ninth place at the Boys and Girls' Championships last year, the Rodrick Myles-coached team has set its sights on at least 65 points this year at the March 20-24 meet.

"I aiming for 65 points ... As long as we get 65-70 points, I will be okay. We don't target position, we target points. Position usually takes care of itself. We don't normally put that (pressure) on the children, we tell them we want this amount of points, each person knows what they must contribute that is what we work towards," Myles told the Gleaner.

At the recent Western Championships Myles said his girls performed true to form, he was especially pleased with the display on the track and expects the same athletes who did well at the regional championship to excel at the national meet.

"We were responsible for four records ... We knew the competition (Western Champs) would be a little stiffer. So the plan was to strengthen from last year and pull them through. We normally dominate the field events so we wanted to be dominant in the sprints ... which we got this year.

"Eighty-five per cent of the team ran personal best and I mean massive personal best ... So I couldn't ask for anything else, when everybody does a personal best at a championship, there is nothing else you can really ask for," he added..

"We have a good Class Two unit ... The throws are a big thing this year ... and we expect some great performances in the field and on the track.

But I think we should have some standouts in Class Two. We have people spread all over and we have a good Class One unit. But the most outstanding performances will come from Class Two," he predicted.

If things continue as they are and Rusea's achieve their aim, he believes they are on track to reaching 200 points within the next three years.

"When it comes on to track and field you have to plan and take practical steps ... we are gradually building. We have started a new phase and we have a three to five-year plan to get over 200 points with the girls programme and we are aiming at top five. So as long as we continue to improve I am alright.. but you have to give yourself time," he said.