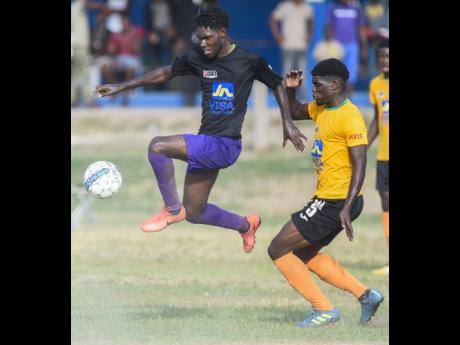 After a closely contested JN Visa/KSAFA Jackie Bell knockout third-round encounter, Tivoli Gardens coach Omar Edwards said his team would have to know what they are doing if they hope to retain the Corporate Area knockout crown.

Lamar Thompson's 35th-minute goal made the difference as the defending champions edged Super League side Molynes United at Molynes field to book their place in the quarter-final round of the competition.

"We are taking it one step at a time, and today's (yesterday) victory was a good one. We got a good goal from Lamar Thompson, one of our new signings, and it's a plus for us going forward. We take every competition we play seriously. We are going to give every competition our best, and Jackie Bell is no different. It is a trophy that all the other teams want, so we have to know what we are doing, too, if we want to retain it," Edwards said.

It was an evenly contested game as the home team gave as good as they got, and both teams created good chances to score.

However, Thompson broke the deadlock on 35 minutes with the game's only goal when he broke away following a mix-up in the Molynes defence and slotted past Crique Williams in goal.

In the second half, Molynes got good chances through Nicholas Nelson, Patrick Shecklude, and Raymond Williams, while Elton Thompson, Howard Morris, and Junior McGregor had oppor-tunities for the visitors. However, Edwards believed that the poor playing surface was a major contribution to their below-par display on the day.

"We managed to get the win, which was the aim and objective coming into the game ... . The playing surface is not conducive to good football, and hence Tivoli Gardens had to divert from our normal game plan and resorted to playing most of the ball in the air, which is not good for football. But overall, the players gave it their all, and the win was on everybody's mind, and I believe we did pretty well today," he said.

In the day's other game, Waterhouse clipped Duhaney Park 1-0 at Baldwin Crescent to also book their place in the last eight.

The competition continues today with Cavalier up against Arnett Gardens at the Anthony Spaulding Sports Complex, starting at 5 p.m.