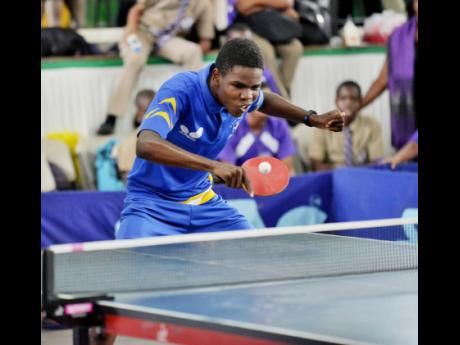 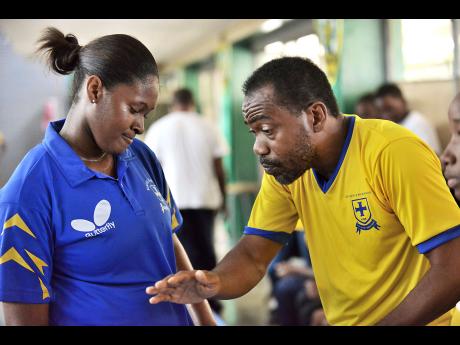 Ian Allen
Brittany Murray listens keenly to what her coach, Samuel Lamont, has to say during a break at the All-Island High School Girls' Table Tennis Finals, which were held at the Excelsior High School auditorium yesterday.
1
2

Lamont, a national coach, said KC had no answer for their preparation and strategy coming into the contest.

"We have a silent assassin, Tarique Thompson, and we sent him out first, as we knew we could take KC out. They (KC) have a very good team, but we were better prepared and we have a lot of tactics, so we used that and our team prevailed," he said.

Thompson defeated the experienced Dennis Daniels 3-2 in the opening contest, before Tyreak Thompson got the better of Kevin Daley 3-0 to give Titchfield a 2-0 lead. KC's Ricardo Hayles then beat Kimoy McEwan 3-0 to bring the score to 2-1. But Malique Rose stopped Romaine Kelly 3-1 to seal the title for Titchfield.

Lamont noted that a bet between a set of overseas-based old boys of both schools played a major factor in their win this year.

"After losing the girls' Under-19 (final), I knew we had to retain the boys' Under-19 title, as there was a bet between the KC old boys and Titchfield old boys abroad, and it's a title (U-19) we have had for a number of years now. But hats off to KC, because our rivalry has been going on since I was a schoolboy and it continues, and now that I am coaching, we are still winning," Lamont said.

"KC is coached by a youngster (Colin McNeish), who was one of the most brilliant young players. But when I became an oldster, I became a brilliant oldster. So now you have quality coaches competing (for both schools), so the Titchfield-KC rivalry continues and we are happy that we have been winning. We know the time might come when KC wins again, but for now, we bask in the victory."