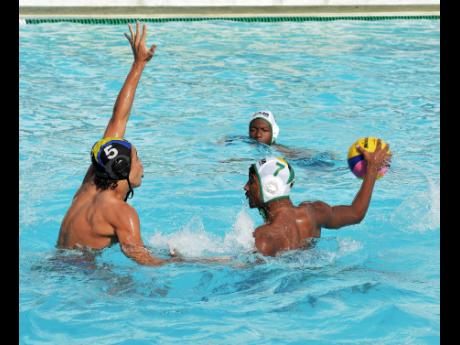 Ian Allen
Bahamas' Alexander Turnquest (left) attempts to block a shot by Jamaica's Cody Jones (7) during their Under 19 Boys final in the CARIFTA Water Polo Championships at the National Aquatic Centre in Kingston yesterday. Lance Rochester, first vice-president of water polo at the Aquatic Sports Association of Jamaica (ASAJ), said winning just one of the four CARIFTA water polo finals at the Stadium pool yesterday is "disappointing". However, he is pleased with the progress the sport has made over the last two years and expects some redemption in the near future.

Jamaica's Under-19 females defeated Barbados 10-3 in the final game for a 5-0 series win. Chenille Haughton top-scored seven goals in yesterday's game following her nine goals on Friday. Rachel Minto-Walker, Jovdanne Harrison, and Zaydia Davis were next best for the hosts, with one each.

"We are pleased with the progress but disappointed that we didn't get the victory in a few medal games, especially in the 19-and-under boys [final], where we won gold last time.

"It was a very close and exciting game, but all it means is that we have to keep working. You win some, and we came second in some, but we have bigger tournaments this year, and we hope this will fuel the programme towards more success in the year," he said.

However, he thought that the Bahamians were excellent. "We have a lot of respect for the Bahamas team and programme. They helped us to build the programme in the region so that we can take on the pan-American region and the world. But our team is young, and I am happy to see the progress. We just have to redouble our effort as Jamaica's water polo is moving on to great things," he continued.

Jamaica's Under-19 female coach, Alrick Brown, said that it was unfortunate there were only two female teams, but said that they had set the tempo for the five-game series from the first match against the Barbadians.

"Our girls came out hard in that first game, and we hit them hard and kept it going the entire tournament. After going 3-0 up, the gold was secure. So we used those last two games to get some experience in our younger girls," he added.

In a closely contested Under-19 boys final, both team were tied at 9-9 in the last quarter, but the visitors scored three successive goals late on to take a 12-9 lead. They eventually held on for a 13-10 victory.

Chris Illing, the Bahamian coach, said that teamwork made the difference. "We won a very tight game. Jamaica are a great opponent, but our boys played as a team. Everybody scored. Jamaica had one or two outstanding players that were better than our players, but our unity and our will made the difference," he said.