Missing it by a Foote! - Petersfield star comes close to 17-year 800m record 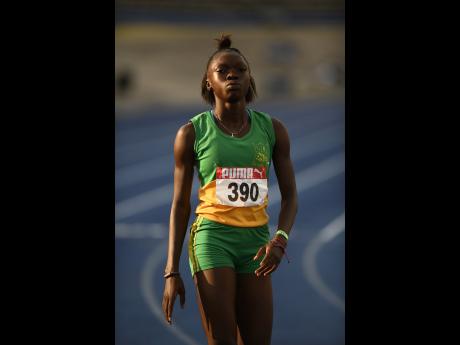 Petersfield's Class Two female middle-distant runner, Shaquena Foote, produced the performance of day one of the ISSA/GraceKennedy Boys and Girls Athletics Championship at the National Stadium, yesterday. Foote covered heat one of the girls Class Two 800 metres in an impressive 2:07.91, barely missing the record of 2:07.74 set by Carlene Robinson in 2001.

Foote, who has run 2.06 already this season, gave a strong effort in the race and said her aim was to break the record and get it out of the way. Nevertheless she believes she still has enough in her tank to take the 17 year-old record in the coming days.

"I felt very good, so I went for it (record). I am feeling very good about the performance," she told The Gleaner.

"I went out to qualify for the next round and to see if I could get the record, but in the end I didn't do that, but my intention is to get the record," she added.

The 16 year-old has been improving all season and she expects nothing less than gold in both 800m and 1500m events.

Foote's coach, Malique Guys, thought only the strong head wind prevented her from writing her name in the record books.