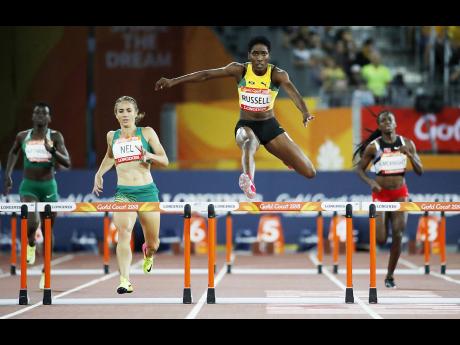 AP
Jamaica’s Janieve Russell (centre) clears a hurdle on her way to winning gold in the 400m hurdles at the Commonwealth Games in Gold Coast, Australia. Russell clocked 54.33 seconds for her win. 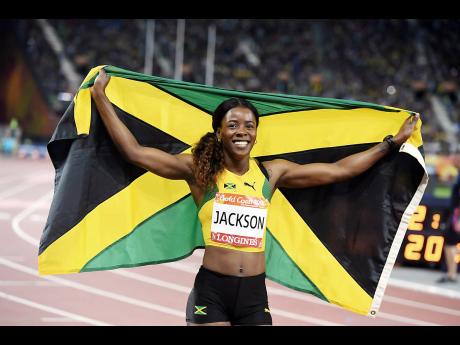 Surgery on her left knee in 2015 and a torn quad a year later, injuries have, quite unfortunately, been a constant companion throughout the relatively young career of standout Jamaican hurdler Janieve Russell.

In many ways, her pet event, the 400m hurdles, like her career, has presented obstacles, but yesterday, at the Carrara Stadium, Russell realised a dream after winning her first senior international gold medal with victory at the Commonwealth Games on Australia's Gold Coast.

Unable to compete at her best at the Rio Olympics, missing out on last year's World Championships, the Gold Coast gold was just the boost that the former World junior champion was working towards and presented a valuable lesson in perseverance.

"To be successful, obstacles are a must, and with these barriers, you have to be persistent, have a lot a patience, have the drive, and be willing to put in the work each time," Russell reasoned during an interview with The Gleaner. "My downs are teaching me to use my mistakes to build myself.

"It's a confidence booster for me," she added. "These Commonwealth athletes that I competed against are also Olympic finalists, and World Championship finalists and competing with them gives me added drive to say 'OK, I have competed with these ladies at the highest levels, and I can do that again at any championship, and I can perform well,' so the gold medal gives me confidence in my talent and what I can do."

"My confidence has grown stronger, and believing there is no limit to what I can do has me approaching my season better than in previous years," Russell noted.

There was more medal success in the women's 200m, where Shericka Jackson produced the best time of her career - 22.18 seconds - to win silver behind Bahamian Shaunae Miller-Uibo, who won gold in a Games record, 22.09 seconds. England's Dina Asher-Smith, 22.29 seconds, got the bronze medal in a close finish ahead of Olympic champion Elaine Thompson, who was fourth in 22.30. Shasherlee Forbes was disqualified for a lane infringement.

Jaheel Hyde, 49.16, held on for the bronze medal in an exciting men's 400m hurdles final, which was won by the Jamaica-based Kyron McMaster from the British Virgin Islands in 48.25 seconds, with Bahamas' Jeffery Gibson, 49.10, taking silver. Andre Clarke was seventh in 50.08 seconds.