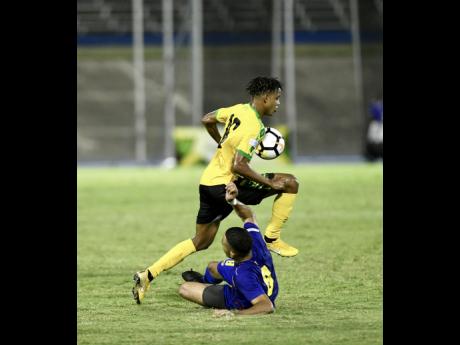 Ricardo Makyn
Peter-Lee Vassell in action for Jamaica against Cayman Islands during their CONCACAF Nations League clash at the National Stadium on Sunday, September 9, 2018.

Exciting Harbour View and national midfielder, Peter-Lee Vassell, will be plying his trade in Major League Soccer (MLS) next season after he was drafted by Los Angeles FC as the number 16 pick in the second round of the draft in the United States yesterday.

In confirming the move yesterday club president Carvel Stewart said that it was already a done deal because they had signed a contract with the MLS for the former Cornwall College player before his departure and it was just a matter of which club would take him.

"He was going to be taken up anyway. He was contracted before he left Jamaica but we kept the information. He had already signed a contract with the MLS and all that was left is for them to assign him to a club," Stewart said.

The 21-year-old Vassell has won many admirers since turning out for Harbour View and the senior Reggae Boyz this year, and despite his obvious attacking qualities, Stewart says his ability to adjust will be his greatest asset in his new environment.

"He came in (Harbour View) last year and he has developed to the point where the MLS found him attractive. He has shown the standard that is necessary to be a true international professional player.

"He has also shown during his period in the Premier League, despite the bad results we were getting, that he is going to mature well because he has shown signs of flexibility. He was asked to play different roles for the team and each role he was asked to take on, he played it well.

"There are more benefits for him the more he plays, so we wish him all the best. Harbour View is always seeking employment for our players and that's why he has gone. You may hear about others later on but for now it's just Peter-Lee," he stated.