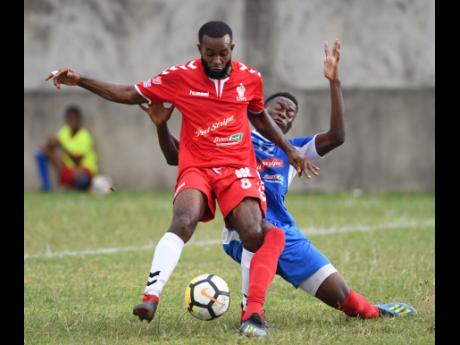 Andre Bernal fired the visitors into the lead after 19 minutes but Javon East equalised for the hosts six minutes into the second-half. However, Akeem Thenstead ensured UWI left the Oval with maximum points, with a well taken goal on 55 minutes.

However, Peart's team has two wins and two losses in its last four games, and four wins, three defeats and a draw in its last eight matches. After yesterday's surprise scalp, the young tactician says the focus now is to try and get results from all their remaining games.

"The result is just three points, and that's good." he said. "In terms of the opponents, it will be beneficial to our confidence, coming to the home of the leaders and getting a win as well putting a good performance, as it wasn't a scrap. We managed to play football. But we are just trying to achieve some consistency in terms of the moments in the game - when we should be getting good performances and consistency across the games, where we pick up results in every game we play," he said.

Portmore could find no answer for the slippery Patrick Brown. The attacker left his marker for dead before delivery a pinpoint cross for Bernal to head home the opener. But Portmore made some changes at half time and the two substitutes, Rondee Smith and Cleon Pryce combination led to East's equalising goal.

But just when Portmore looked to seize the ascendancy, Brown slalomed through the Portmore defence before laying off the ball for Thenstead, who lifted over the advancing Shaven Paul for the winner.

Despite going behind, Portmore kept at their opponents and Smith wasted two glorious chances for an equaliser, blasting over the bar from inside the area on both occasions.

Although the top six is UWI's objective and consistency is the focus, Peart says they intend to take it a game at a time. "For us, we are just focused on the next game, that's our mantra going forward. Not looking at what the next five games can bring or what has happened before. It's just the next game. Our next game is against Harbour View and that is a team on the up, so we just have to bring a good performance again," he added.

Portmore remain two points clear at the top of the table with 39 points. While UWI climbed into the top six on 30 points, the same as fifth placed Mount Pleasant. Meanwhile Cavalier sit second, Waterhouse are third with 34, and Arnett fourth on 31.