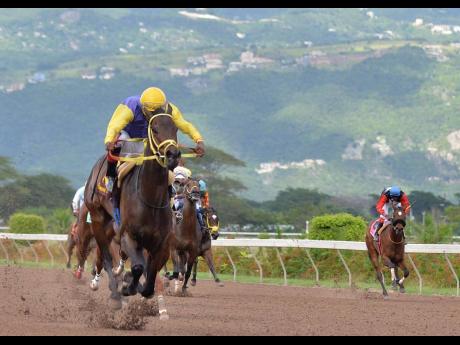 FATHER PATRICK appears to be a cinch in one leg of Saturday’s six-furlong co-feature for three-year-olds, the Sir Howard Stakes. However, the fillies-only Hot Line Stakes has been thrown open with fitness concerns surrounding the return of LADY BLUE from a three-month lay-up.

Ian Parsard’s FATHER PATRICK will carry 122lb after absolutely ripping up the track in 1:06.2 when winning on debut at five and a half furlongs, running a pound heavier, on January 12.

For the second year, the Sir Howard and Hotline Stakes have been diverted from traditionally being events for non-winners-of-two-races, instead ignoring particular two-year-old victories such as the three-furlong straight Philip Feanny’s CUSTER won on debut last summer, yet still penalised with topweight 126lb.

A half-brother of now-retired sprint menace CRUCIAL APPEAL, FATHER PATRICK continues to toy with his open allowance stablemate, SUPERLUMINAL, in the mornings at exercise.

SUPERLUMINAL took on none other than ANOTHER VIGOROUS last time out in the Alexander Hamilton Trophy at a mile, two weeks ago, dismissed the speedster and held on to thwart late-running SARATOGA SIGHT.

At exercise eight days later, FATHER PATRICK blitzed SUPERLUMINAL with speed, both cantering from the winning post, which was the last the older horse saw of his stablemate, who stopped the clockers’ watches in 59.2 for the last five furlongs.

CUSTER, a half-brother to Richard Azan’s insanely fast PEKING CRUZ, has shown the same tendencies as his sibling, not surprising, considering he is by Calder track record holder, Blue Pepsi Lodge. Therefore, running with 109lb at five furlongs straight on last, receiving 10lb from UNIVERSAL BOSS in the one-hole and 17lb from first-time-out stablemate, LEGALITY, CUSTER made short work of rivals in 58.2.

Despite having worked well for the match-up with FATHER PATRICK, CUSTER was beaten at exercise on separate occasions by United States-bred stablemate, LEGALITY, who has been showing his true colours since his mild introduction at five furlongs straight.

The event should be interesting, in terms of tactics among three top riders, Walker aboard FATHER PATRICK, Dane Nelson on CUSTER, and Robert Halledeen having the leg up on TOONA CILIATA. FATHER PATRICK, however, seems too talented to not get the nod.

In the Hot Line Stakes, a lot will depend on what shape LADY BLUE has returned in after being laid up for about a month following her brave second-place run to CORAZON in November’s Pick-3 Super Challenge at seven furlongs, leading for the first six.

LADY BLUE spent most of January and the first week of this month mainly cantering before getting a half-mile in 48.2. She returned to post 1:09.0, beaten by stablemate BRANDY, 1:07.1, for a flat five-and-a –half, a week ago, not exactly the most inspiring workout heading into this event.

In addition, trainer Wayne DaCosta has not replaced the blinkers, which LADY BLUE wore for her first three races, before being removed to facilitate the longer Pick-3 Super Challenge, making her suspect coming off a three-month lay-up, opening up the event to almost all and sundry if she fails to fire.