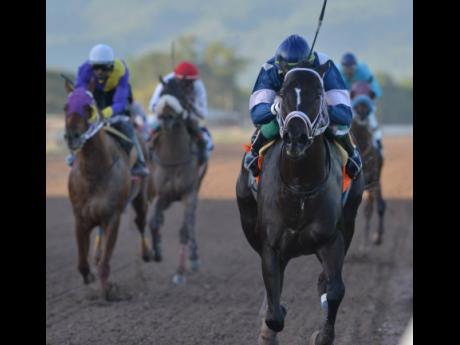 MY SISTER finally gets a good draw at five furlongs straight and should start this afternoon’s late double for the trainer-jockey-owner combination of Gary Subratie, Dane Dawkins, and Michael Bernard, with the closer being SOUL CURE in the fillies-only night pan at five furlongs round.

Dawkins and Subratie moved their first-to-third strike rate to 43 per cent for the last year after teaming up to score a narrow victory with K D FLYER at five furlongs straight on Wednesday.

Bernard, whose horses race under the nom de plume ‘Michros’, narrowly leads Elizabeth DaCosta in the owners’ championship, which he bitterly lost on trophy value to Elite Bloodstock in 2012. The former Supreme Ventures Racing and Entertainment Limited chairman has been quietly plotting redemption, which could come as early as next year when he and Subratie unleash a slew of horses bought in January’s Ocala Winter Sale.

Run-on sprinter MY SISTER should start favourite in the ninth for runners who have never won an overnight allowance, breaking from stall seven in an eight-horse field, after drawing near the far rail and being twice beaten in races won by lightning-fast ADONIS out of the straight.

A filly who consistently pays her keep, earning $3.2M from 25 lifetime starts, notching four wins, two second-place finishes and five third-place along the way – a near 45 per cent first-to-third strike rate - MY SISTER won her last two races in the space of two months, November last year and January 12 this season.

However, not being a specialist sprinter has had her at a disadvantage against quicker rivals whereas she is an in-and-out middle-distance runner, leaving her susceptible to horses with sustained pace.

Though she won her last two races at middle distances, six and a half and seven furlongs, MY SISTER is versatile at five furlongs straight, finishing close-up to top sprinters such as stablemate NUCLEAR FLIGHT and ANOTHER VIGOROUS, plus her last two efforts against ADONIS.

Undone by the draw

On February 16, MY SISTER was definitely undone by the draw, dead against the far rail at post-position one in a 14-horse field, yet finished almost eight lengths fourth behind ADONIS, RAS EMANUEL, and ZEPHYR.

Drawn a little better against ADONIS on December 29, post-position four in an 11-horse field, she was third, beaten by two and three-quarter lengths.

Subratie has left nothing to chance, declaring MY SISTER with blinkers and cantering her in the equipment since Sunday for her to be acclimatised to the equipment, which she will wear for the first time.

TWILGHT DREAMS, DUNROBIN, and ZEBRANO all possess speed but MY SISTER’s last-furlong kick and relatively light impost, 116lb, should do the trick for Dawkins and Subratie.

Meanwhile, Dawkins replaces Robert Halledeen aboard Subratie’s three-year-old maiden, SOUL CURE, a half-sister to SURE STEP, following the filly’s disqualification from second, two Saturdays ago, behind SWEET LIKE SUGAR, beaten by only a head, after causing interference to RAW LIQUID near the three-furlong point.

SOUL CURE, one of two Subratie runners in the event, has been completely taken off speed gallops by her trainer, possibly due to her wiry frame. However, she showed up on debut, third behind ONE SOO TRUE at five furlongs round, followed by her disqualified second place behind SWEET LIKE SUGAR at five and a half.

Subratie has made an equipment change, declaring a tongue tie, after the filly was only caught at the wire by SWEET LIKE SUGAR. Going a half-furlong shorter, she definitely gets the nod.