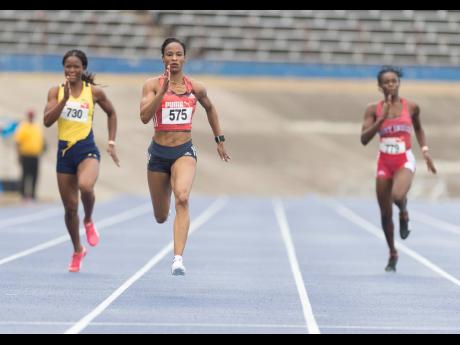 National senior representatives Anastasia Le-Roy and Rasheed Dwyer were in great form for Sprintec Track Club at yesterday’s first staging of the John Wolmer Speed Fest meet at the National Stadium. Defending ISSA/Boys champions Calabar High also sent out a message to their rivals that it will take something special to stop them from retaining their title later this month.

Veteran Le-Roy topped the field in the women’s 200 metres, clocking 23.28 seconds as second overall in the event went to MVP Track Club’s Srabani Nanda with 23.72, while another veteran, Sherone Simpson of Sprintec, was third in 23.75.

MVP took the top two places in the women’s 100 metres. Shericka Jackson, competing in a negative wind of 2.0 metres per second, sped to victory in 11.53 seconds to get the better of teammate Stephenie-Ann McPherson (11.56,) with Sprintec’s Sashalee Forbes taking third in 11.82.

After being out of competition for more than a year due to injury, Dwyer looked quite relaxed in taking the men’s 100 metres for Sprintec in 10.28. His training partner, Oshane Bailey, finished second in 10.39 as long jump specialist Tajay Gayle of MVP took third in 10.42 seconds.

Calabar showed why they are favourites again to take home another title at Boys’ Champs with good all-round performances. Sprinter Oblique Seville, a former Holmwood Technical athlete, took the Class One 100 and 200m double. In the 100m metres, he clocked 10.46 before taking the 200m in a wind-aided 21.30.

In the field, IAAF World Under-20 discus champion Kai Chang showed his class with a big win for Calabar. He threw 56.46 metres as his teammates Shadane Adamson (47.84m) and Tarique George (46.51m) were second and third, respectively.