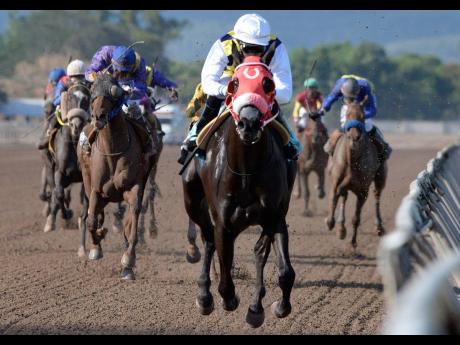 Lionel Rookwood
STRANGER DANGER (Anthony Thomas) gallops away from the field to win The Ash Wednesday Trophy over 1300 metres at Caymanas Park yesterday.

The three-year-old gelding ticked off his fourth consecutive win by shaking off UNCLE VINNIE and STORM PRINCESS three furlongs out, winning under a hand ride to clock 1:17.3, a time many grade one horses would envy.

Conditioned by champion trainer Wayne DaCosta, STRANGER DANGER has been dismissing two-time Superstakes and Diamond Mile-winning stablemate SHE’S A MANEATER, at exercise in the mornings, staking his claim as one of the best horses in the country.

Meanwhile, trainer Spencer Chung’s EXTRUDER easily won the fifth event for maiden three-year-olds at seven and a half furlongs with Dane Nelson at odds of 1-5.

EXTRUDER took over coming off the home turn, leaving BLACK RIVER to outbattle early leader CAIRO for the runner-up spot.

Nelson was expected to also land division two of the event, but his mount, 4-5 favourite CRIMSON, was slowly away and afterwards unseated him down the backstretch while trying to avoid DORA LEE, who fell with Shamaree Muir. The event was won by 8-5 second choice, SEBASTIAN, with Oneil Mullings for Philip Feanny, outfinishing Linton Steadman aboard Adin Williams’ LAYU KAWEN after a prolonged stretch duel.

SEBASTIAN started a two-timer for Mullings, who returned to land the ninth with even-money favourite REIGN OVER ALL at four furlongs straight. Thomas was also aboard two winners, opening the 11-race card with REASSURANCE at odds of 7-1 before his armchair ride aboard STRANGER DANGER in the eighth.

Hakeem Pottinger, who won the fourth event astride Steven Todd’s 3-2 chance, POWEROFGIVING, benefited from Nelson’s fall, replacing the three-time former champion jockey aboard 5-1 shot A SEH SOUP to close the card at six and a half furlongs.