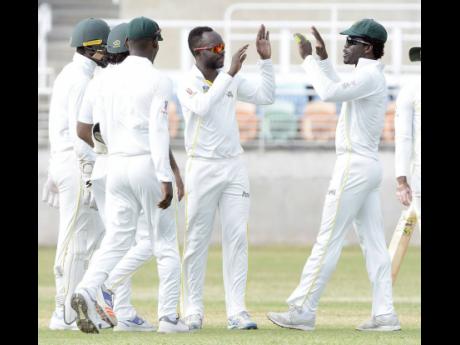 In one of the most exciting Regional Four-Day games seen at Sabina Park in many moons, the Barbados Pride carved out a narrow two-wicket win over the Jamaica Scorpions.

Chasing 158 to win, the visitors closed on 161 for eight. It was effectively 161 for nine, since Jomel Warrican had not taken any part at all in the game after going down sick just before the start of the match and had flown back to Barbados.

The Pride started yesterday’s play on five without loss, needing another 153 to win. Jerome Taylor made two telling early breakthroughs, knocking back the stumps of both openers, Kraig Brathwaite and Shane Moseley, to leave the visitors precariously positioned on 26 for two.

It was 59 for three when Jonathon Carter was caught by wicket-keeper Kennar Lewis for six while cutting at Akim Fraser.

The Scorpions also managed to get the dangerous Roston Chase out for only 18 runs, with the duo of Fraser and Lewis again proving effective.

At that stage, it was 89 for four and the game was sitting in the balance. It was soon 136 for five when Shamar Springer was removed leg before wicket (lbw) LBW to Miller for 18. Captain Shamar Brooks was next to go at 143 for six, lbw to Miller. His innings of 71 was priceless. He batted with class and skill and demonstrated admirable temperament, with wickets tumbling around him in a tight run chase. It was enough to earn him the Man-of-the-Match award.

The pair of Markino Mindley and Miguel Cummings were then asked to get the final 10 runs in a tense, high-pressure atmosphere, knowing that a wicket would hand the game to the Scorpions with Warrican not available to bat. The pair kept their nerve and carried it home, with Mindley heaving Frazer over long on for six to finish the game.

Miller ended with three for 43 and Fraser grabbed three for 55, while Taylor took two for 18. The Jamaica Scorpions will close out their season when they face the Trinidad and Tobago Red Force later this week.