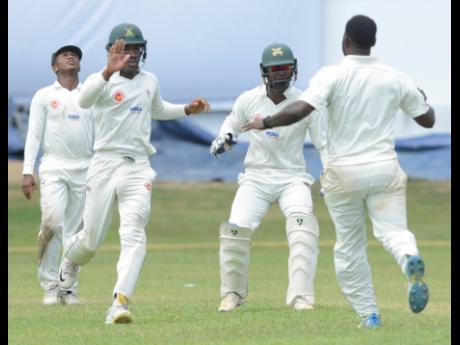 Ian Allen
Members of the Melbourne Cricket Club celebrate the dismissal of a Jamaica Defence Force batsman during the Jamaica Cricket Association Senior Cup final at Sabina Park on Saturday.

Melbourne are the 2019 Senior Cup champions after taking first-innings points in their drawn two-day final against the Jamaica Defence Force (JDF) at Sabina Park yesterday.

Resuming on 102 for two in reply to JDF’s first-innings score of 113, Melbourne were all out for 179. Shamari Brown took five for 31, including a hat-trick, and looked likely to dismiss Melbourne for much less. However, Yannick Elliott’s defiant 31 helped eke out a valuable 66-run first-innings lead for Melbourne.

With time running out, and in a bid to force an outright result, JDF went on the attack in their second innings, scoring 192 from 31.4 overs. Jermaine Harrison, 49, and captain Leighton Leslie, 43, were the chief contributors. Left-arm spinner Christopher Lamont bowled with guile and good control to claim seven for 73. Set 126 to win in approximately 25 overs, Melbourne received an early scare, losing their first three wickets with only 14 on the board. Wicketkeeper Aldane Thomas and Raewin Senior then batted steadily until stumps in an unbroken fourth-wicket stand of 56 to ensure that Melbourne’s first-innings points were enough to lift their second title in four years. Thomas was unbeaten on 54, while Senior was left not out on three from 43 balls. Andre Dennis took two for 16, and Shamari Brown had one for 18.

Melbourne coach Andrew Richardson said, “Our bowling unit did a fantastic job in the first innings, and that set the tone for the rest of the game.”

JDF manager Major Aubyn Sibbles said he was “absolutely proud” of his team.

“It was a rough season,” he said. “Not many expected us to be here. The fact that we got here is testament to the commitment of the guys.”