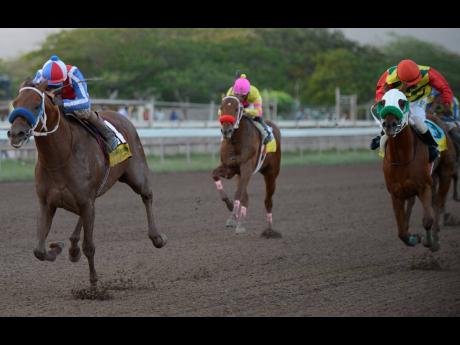 Nunes, comfortably the leading trainer after being narrowly denied a maiden title win by 18-time champion DaCosta last year, closed the weekend with seven winners after SUPREME SOUL closed a three-timer for his barn.

Partnered by Shane Ellis, who won the event in 2013 with WILLIE GOLDSMITH, 7-5 chance SUPREME SOUL broke sharply from his high draw, widest at postposition 14, dashing from the gate to grab the lead entering the main track alongside stablemate EARN YOUR STRIPES.

RUN THATCHER RUN started his run leaving the half-mile, circling SUPREME SOUL to join EARN YOUR STRIPES, TOONA CILIATA and a weakening FATHER PATRICK as the leaders thundered into the home turn.

However, the chestnut colt, who was rushed into two races in a week to prove his fitness for the Guineas, failed to kick when set down for the stretch run, while far-striding SUPREME SOUL swooped down for the kill two furlongs out.

Running on fumes approaching the last furlong, RUN THATCHER RUN was at first collared by SUPREME SOUL, followed by TOONA CILIATA, rallying on the inside.

SUPREME SOUL started stamping his authority inside the last half-furlong, moving away from his stablemate, who was left to fend off 15-1 chance SENTIENT by a neck to complete a Nunes exacta.

Ellis was among three jockeys with two winners on the 10-race card, earlier booting home CODE OF HONOR in the third, the first of two winners for trainer Michael Marlowe.

Apprentice Christopher Mamdeen also had two winners, adding to a three-timer on Saturday, moving to 28 winners, three clear of Walker, a six-time former champion, who went winless for the weekend.

Aaron Chatrie guided home CAPTAIN GRANVILLE in the eventful seventh event, in which three horses were scratched lame at the gate, before returning in the eighth to score with 27-1 outsider, SMOKESCREEN.

The Easter weekend of racing opens on Saturday with the Lady Geeta Trophy for grade-one horses, followed by Monday’s holiday meet.