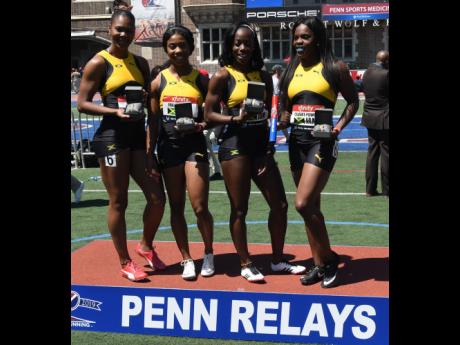 Collin Reid Photo courtesy of Team Jamaica Bickle
Courts, Supreme Ventures Limited and Guardian Life: Members of Jamaica's women's 4x100m relay team (from left) Natasha Morrison, Shelly-Ann Fraser-Pryce, Sasha-Lee Forbes and Schillonie Calvert pose with their prizes after their win in the USA vs Rest of the World series at the Penn Relays in Pennsylvania yesterday.

Calabar High School were the toast among high school boys on yesterday’s final day of competition at the 125th staging of the Penn Relays at the University of Pennsylvania’s Franklin Field, successfully defending two of their three titles by winning the 4x400m and 4x800m relays.

Meanwhile, there were mixed results for Jamaica in the USA vs The Rest of the World series, with the Jamaicans taking the women’s 4x100m as well as the top two spots in the women’s 4x400m.

After their success earlier in the day in the 4x800m relay, where the quartet of Devannah Gayle, Kevroy Venson, Rivaldo Marshall, and Kimar Farquharson raced to victory in 7:36.61 ahead of Kingston College, 7:40.96, Calabar closed the show in style by taking the curtain-closing mile relay in an exciting finish.

It wasn’t easy as Holmwood and Kingston College (KC) controlled the first two legs, but Calabar stayed in touch throughout, with anchor man Evaldo Whitehorne receiving the baton just behind KC’s Shantamoi Brown. Whitehorne attacked Brown early, taking over the lead after the first 100 metres before taking control, in the process splitting 46.77 seconds to lead his team to victory.

St Jago created a major upset by winning the Boys Championships of America 4x100m – their first win in the event in 12 years. Despite a good second leg from Vashaun Vascianna, St Jago were always behind KC, which got a good start from Wayne Pinnock. However, a blunder on the anchor leg by the boys from North Street allowed St Jago to take the lead, with Kavian Kerr crossing the line in 40.83 seconds.

Pinnock actually picked up the only individual win yesterday by a Jamaican as the defending long jump champion returned to win the event with a leap of 7.87m, just one centimetre outside his record jump made last year. Jordan Turner of Calabar was second with 7.59m while Pinnock’s teammate, Shaquille Lowe, finished third with 7.42m.

In the USA vs the Rest of the World women’s 4x100m, the Jamaicans (Shelly-Ann Fraser-Pryce, Natasha Morrison, Schillonie Calvert, and Sasha Lee Forbes) clocked 43.19 to better Canada, 44.37, and USA Red, 44.40. There was less joy for the Jamaicans in the male equivalent as their Green team, which featured Nesta Carter, Julian Forte, Rasheed Dwyer, and Nigel Ellis, finished fourth in 39.26, with the Gold team (Jevaughn Minzie, Chadic Hinds, Kenroy Anderson, Chad Walker), 39.84, taking fifth behind USA Red, 38.80, Canada, 38.94, and USA Blue, 39.16.

There was big success for the Jamaicans in the women 4x400m as the Gold team, 3:28.94, which consisted of Shericka Jackson, Janieve Russell, Christine Day, and Stephenie-Ann McPherson, won ahead of the Jamaica Green team (Roneisha McGregor, Anatasia Leroy, Rhonda Whyte, Tiffany James), 3:31.04, with Canada, 3:31.63 taking third.