‘We want it more!’ - Portmore Utd ­captain says hunger will be key in RSPL final 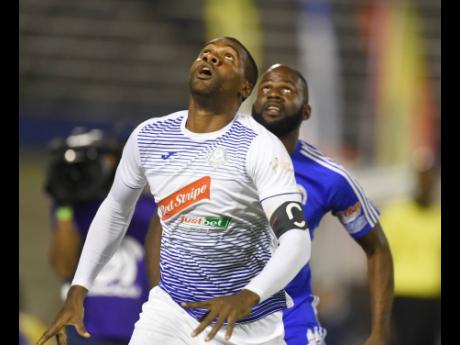 Portmore United captain Rosario Harriott says that in the three games they have played against Waterhouse FC this season in the Red Stripe Premier League (RSPL), they have found the going tough, with all ending in draws. He expects things to be no different when they meet for a fourth time in the final at the National Stadium tonight.

The first game between the sides ended in a 2-2 draw, the second ended 1-1, and the third game ended goalless. Last season’s final, which was also contested by both teams, also ended in a 0-0 draw after regulation and extra time, but Portmore claimed the title after a 4-3 penalty shootout win. Harriott says both teams have shown that they are strong both in attack and defence and he believes that the hungrier team will take the RSPL prize.

“It’s tough (playing Waterhouse), and we are a strong defensive team just like Waterhouse,” Harriott said. “We have to go out and do the same things we have been doing throughout the season. But the team that goes out and wants it more will win. That is what will make the difference, and we definitely want it more,” he said.

Portmore, with 29 goals conceded, have leaked five more than their opponents, but their 56 goals scored is six better than Waterhouse, which creates parity, coming into the final match of the season. But Harriott, whose defensive unit comprises himself, goalkeeper Shaven-Sean Paul, Emelio Rousseau, Roberto Johnson, Ryan Wellington, and Romaine Brackenridge, is confident that whoever coach Shavar Thomas selects to play alongside him tonight will do a good job.

“It’s an awesome feeling to be back in the final. It gives us a chance to defend our title,” he said. “As leader of the defence and leader of the team, I have to make sure everyone is of one accord and that they go out and perform and give of their best. We went about eight games with clean sheets this season, and we still feel we could do much better. But we came through (play-offs), and we are now in the final, and we are grateful. Now, we want to do our best.”