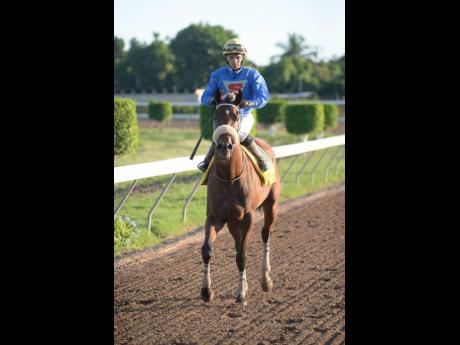 GOING two turns, SARATOGA SIGHT’s big effort on December 12, caught stealing home by HOVER CRAFT at nine furlongs and 25 yards, appears to give him the edge over BRUCE WAYNE in this afternoon’s Ren Gonsalves Trophy at 10 furlongs.

BRUCE WAYNE has no such record in a route race. However, returning six pounds lighter with patient-as-Job Anthony Thomas, after having to switch lanes to avoid a bumping match a furlong out, yet still finishing ahead of SARATOGA SIGHT at a mile two Saturdays ago, gives the super-fit local-bred a sound chance.

SARATOGA SIGHT appeared as though he would have swept past rivals after making his move at the half-mile marker, swinging into the straight five-wide and full of running, challenging the leaders, while BRUCE WAYNE was stuck in traffic, turning seventh into the lane.

Unable to see from his left eye, SARATOGA SIGHT bumped into LOTTERY TICKET when apprentice Tevin Foster applied the whip. He afterwards got a taste of his own medicine, a chain reaction sparked by MY ELLE BELLE slamming unlucky LOTTERY TICKET a furlong out.

BRUCE WAYNE had to be shifted from behind six horses – eventual rail-scraping winner UNCLE FRANK, MY SISTER, MADAM SECRETARY, MY ELLE BELLE, LOTTERY TICKET and SARATOGA SIGHT – costing the much-improved five-year-old what would have been a better placing than third.

BRUCE WAYNE’s late surge took him past all but the first two past the post, UNCLE FRANK and subsequently disqualified MY ELLE BELLE, as the others, including SARATOGA SIGHT, flattened out inside the last half-furlong.

Gary Subratie sharpened SARATOGA SIGHT Sunday morning with a half-mile gallop of 47.3, making intentions clear that the American will have to be caught. In addition, he’s drawn at post-position one, which keeps his rivals within sight of his working right eye.

Despite his lack of experience at two turns, the manner in which BRUCE WAYNE rushed past SARATOGA SIGHT a furlong out at a mile suggests the local-bred is much improved and should get 10 furlongs, especially with the handicaps in his favour.