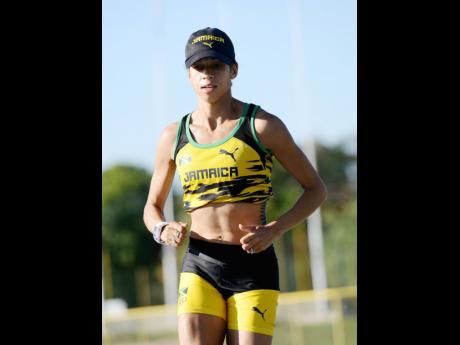 Jamaican distance flag-bearer Aisha Praught-Leer, fresh from establishing a new national record in the 5000m, says she will be focusing on the 1500m event this season and is looking to continue rewriting Jamaican distance history.

Praught-Leer, who has represented Jamaica in the 3000m Steeplechase at the 2015 and 2017 IAAF World Championships, as well as the 2016 Olympics, qualifying for the final in 2016 and 2017, also holds the national record in the event – 9:14.09 minutes – which she registered in August last year, at the Brussels Diamond League.

She also won gold in the event at the Commonwealth Games last year in Australia, but despite her success in the 3000m steeplechase and the recent promised shown in the 5000m, the 29-year-old, says the 1500m will be her main event this season. She has targeted Yvonne Mai-Graham’s 4:01.84 national record, which was set in July 1995, during a two-year span that saw the former East German athlete set records in the 1500m, mile, 3000m and 5000m.

Praught-Leer, who like her predecessor, was born outside Jamaican shores given her Illinois, USA, roots has already removed Mai-Graham’s name from the 5000m record book, bettering her 15:07.91 mark, with a 15:07.50 second-place finish in the event at the USATF Distance Classic in Los Angeles, last week Thursday.

It was a special result for Jamaica’s new distance queen, in what was her first professional 5000m race.

“Setting a national record is rare and special. Some of the middle-distance records have stood for over 20 years, set by Yvonne Mai-Graham. Breaking her record is not an easy task, and I got it by the skin of my teeth! I have set intentions to break as many distance records as I can, so earning this one felt good,” Praught-Leer told The Gleaner.

“The skill set necessary to run a fast 5k is similar to the skills I developed running steeplechase. I’ve had my eye on the 5k for a few years, but fitting it into my schedule hadn’t worked. One benefit of the World Championships being later in the year is that we have more time to experiment with races early season. I enjoyed racing the 5k, I learned a lot from racing the longer distance and it went well. I anticipate adding it to my arsenal, possibly attempting to dip under the 15 minute barrier this season.”

“My performance tells us we’re in a good place. I targeted the 5K record after indoors, but two weeks of training in March were slightly imperfect because of some issues with my foot mechanics. Thankfully we were able to turn it around quickly ... we’re expecting more personal bests to follow,” she added.

However, Praught-Leer is focusing her attention on the shorter 1500m event for this season.

“I’m pleased to announce I am targeting the 1500m as my primary event this year,” Praught-Leer stated. “I’ll be attempting to break the 1500m National Record this season, a formidable 4:01.84. My next race is another distance-only meeting in the US, the Music City Distance Carnival in Nashville on June 1. I’ll take to the European circuit in July.”

She is hoping the move will help her to continue her growth and development as a consistent world class performer.

“I’ve grown from a bubble athlete to a consistently good performer over the last few years, which was the shift I wanted when I made the decision to train in Boulder with my coach Joe Bosshard and our training group of accomplished athletes. Operating in the most professional sense and competing at the highest level is where I now feel like I comfortably belong. It has taken years to develop, and I’m glad I stayed the course.

Praught-Leer’s personal best in the 1500m currently stands at 4:05.52 minutes and was set on May 10, 2015 in Japan. Since then, she has only competed in the event outdoors on five occasions.