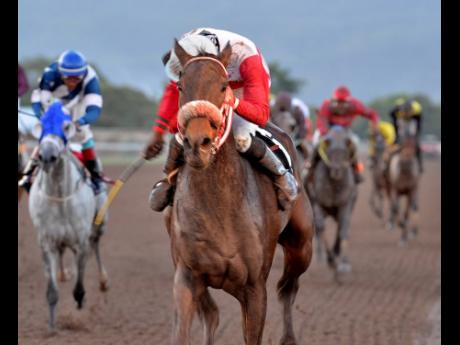 CHAMPION trainer Wayne DaCosta appears to have a plan up his sleeve for UNCLE FRANK’s clash with Anthony Nunes’ HOUDINI’S MAGIC and SARATOGA SIGHT, with whom he renews rivalry in this afternoon’s fifth race after winning an eventful finish at seven furlongs on May 11.

SARATOGA SIGHT certainly has no complaint, weight, distance or pace, making him the horse to beat on paper at eight and a half furlongs. He certainly has the handicaps in his favour against UNCLE FRANK, who he has finished ahead of on no fewer than three occasions since December, bar their last meeting on May 11 when DaCosta’s runner stole a hotly contested race with a searing stretch finish.

Slowly into stride in a 16-horse field, UNCLE FRANK was pushed by Philip Parchment to secure a rail-scraping run, which made him save ground for the entire trip, while SARATOGA SIGHT swept wide into the lane and got involved in bumping matches with LOTTERY TICKET and MY ELLE BELLE.

A strong galloper, SARATOGA SIGHT returned 12 days later to turn the placings on third-placed BRUCE WAYNE after finishing behind his rival in the race won by UNCLE FRANK, scoring a commanding victory at nine furlongs and 25 yards.

However, DaCosta’s plan to upstage SARATOGA SIGHT is in plain sight. One need not be a fly on a horse’s tail in the parade ring to know what DaCosta’s instructions will be to Abigail Able on DRUMMER BOY and Anthony Thomas astride UNCLE FRANK.

SARATOGA SIGHT relishes two things, sweeping moves leaving the three pole and a rail-hugging run to compensate for the lack of sight in his left eye.

DRUMMER BOY is drawn at post-position two, which ­automatically gives him the rail, being lighter and quicker than HOUDINI’S MAGIC in the one hole. UNCLE FRANK is next at post-position three, which should keep him on DRUMMER BOY’s tail and inside of SARATOGA SIGHT at stall four.

DaCosta’s hopes rest with pesky DRUMMER BOY pulling SARATOGA SIGHT off his bridle sooner than he would like, giving improved UNCLE FRANK the rail run, which SARATOGA SIGHT craves to be fully effective.

Christopher Mamdeen is a forceful rider, which could be his downfall on SARATOGA SIGHT if he tackles too early with the intention to grab the rail. Anthony Thomas is more experienced and composed, which could play into DaCosta’s plans with UNCLE FRANK, ­making the event very much a jockeys’ race.

Anthony Nunes has two runners in the event, topweight HOUDINI’S MAGIC and last year’s Oaks winner, FAYROUZ, who is on the rebound after trying to punch above her weight following a short-head victory against MARQUESAS and UNCLE FRANK in September’s Fontainbleu Trophy, an open allowance, at seven and a half furlongs.

Running for the third time this season, given a well-deserved break between December and April, FAYROUZ has hardly done anything at exercise to suggest she should be a factor against colts and geldings, who have been busy on the exercise track and in races while she lounged around ­cantering in the mornings.

However, she appears fit enough to help her stablemate, HOUDINI’S MAGIC, who will want an honest pace, not a lope-along, which could leave him flat-footed with 126lb, when the lighter horses, especially United States-bred SARATOGA SIGHT, carrying 110lb, change gears leaving the half-mile.

Even with FAYROUZ to help, HOUDINI’S MAGIC worry might not be the pace but instead the weight, which he has found too burdensome since leaving ­overnight allowance.