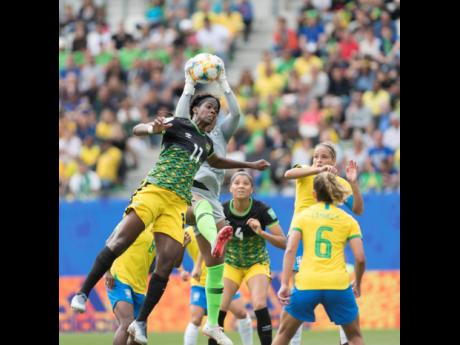 The Jamaicans barely got into stride at the Stade des Alpes as Brazilian striker Cristiane, 34, became the oldest player to score a hat-trick at the FIFA Women’s World Cup and the first Brazilian to bag three in a single game since Sisi and Pretinha led Brazil to a 7-1 hammering of Mexico in 1999.

Shaw, who, despite putting three shots on target, wasn’t her usual dominant self, believes a lack of experience at this level played a role in the Reggae Girlz’s uncertain display yesterday.

“The game didn’t go as we planned. It happens, because Brazil is a great team, but while we were the less experienced team, we knew that once we crossed that touchline, we are just as good. It’s clearly not the result we wanted, but we worked hard for each other and gave it our best,” said Shaw.

“It’s the first wind; we didn’t know what to expect. We can now see that this is what it is, and going into the next game, we should be more relaxed and just play our game,” she added.

The Jamaicans will next face Italy, who defeated Australia 2-1 in the group’s other game yesterday. That contest will take place on Friday in Reims.

“We are not far. These other countries have international breaks, and they play practice games and have camps. We only come together for tournaments, and we came out here and gave this type of performance, so could you imagine if we were as fortunate as these other teams?” added Shaw. “Our federation is not the best, but we have to look forward and see that we have a great bunch of girls and continue to build on this.”

Shaw was left disappointed with her own performance and said she is looking to do more in the team’s next assignment.

“I tried my best. That wasn’t good enough this time, and hopefully, in the next game, I can keep working and improve from this,” said Shaw.

Shaw, who was named The Guardian’s Footballer of the Year for 2018, was the top goalscorer in the world in World Cup qualifying with 19 goals.