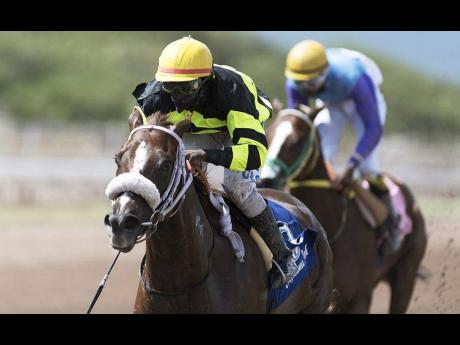 Bar PATRIARCH, who she had behind by almost seven lengths in her loss to ANOTHER VIGOROUS on May 25, a clear improvement after beating him by a half-length in April’s Eater Sprint, HILLY’S HALO is the lone standout at six furlongs.

HILLY’S HALO ran her heart out on May 25 but found old rival ANOTHER VIGOROUS at his best, going down by a length in a super-fast 58.4 for five furlongs round.

Returning in a field made up of Wayne DaCosta’s no-hoper, HOVER CRAFT, HILLY’S HALO is accompanied by two stablemates, who can be best ignored, MY SISTER and UNCLE VINNIE, her only real threat being PATRIARCH, joined by his stablemate, EXHILARATE.

At 121lb, allowing American HILLY’S HALO a pound, EXHILARATE is merely making up numbers, unable to even maintain pace with stablemate PATRIARCH. Both will have to run on the lead, making Anthony Thomas’ job aboard HILLY’S HALO really easy, being a run-on sprinter.

PATRIARCH went down by a half-length to HILLY’S HALO on his return off a four-month lay-up in April and won his follow-up race on May 15, beating recent Ahwhofah Sprint winner, ZEPHYR, but ran terribly 10 days later when renewing rivalry with ANOTHER VIGOROUS and HILLY’S HALO.

Though he has worked reasonably well, galloping five and a half furlongs in 1:07.0 on Sunday, the extra half-furlong, after being caught at five and a half by HILLY’S HALO in the Easter Sprint, will again prove his undoing, more so with 122lb.