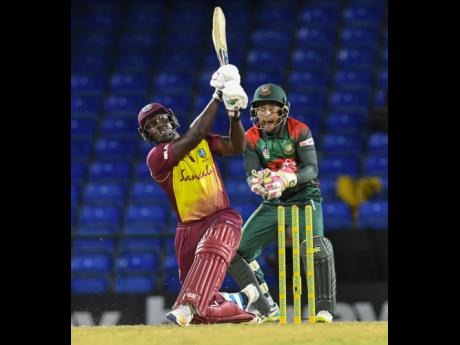 Senior team all-rounder Rovman Powell summoned all his international experience to produce a terrific final over as West Indies A beat India A for the first time in the five-match series with a nerve-jangling five-run victory on Friday.

With India A entering the final requiring nine runs to reach their target of 299, medium pacer Powell conceded four singles to limit the visitors to 293 for nine from their allotted 50 overs.

All six deliveries were fullish in length, denying set batsman Axar Patel any opportunity to free his arms and carry his side to a victory, which seemed unlikely with India A tottering on 160 for six in the 32nd over.

Axar led the revival, however, blasting an entertaining unbeaten 81 off 63 balls with eight fours and a six while anchoring two precious half-century stands down the order.

First, he put on 60 for the seventh wicket with Washington Sundar, who made 45 off 52 balls, before adding a further 69 for the eighth wicket with Khaleel Ahmed (15).

But with the momentum having shifted in India A’s favour, Powell held Axar to a single off the first ball as Navdeep Saini (0) found himself short at the non-striker’s end attempting a second run.

Accurate, nerveless bowling then silenced Axar for the remainder of the over as West Indies A broke their sequence of defeats in the series.

Powell finished with two for 47 while fellow seamer Keemo Paul picked up two for 61.

West Indies A had earlier produced their best batting display of the tournament when they posted 298 for nine off their 50 overs, with captain Roston Chase (84), wicketkeeper Devon Thomas (70) and left-hander Jonathan Carter (50) hitting half-centuries.

Sent in at the Coolidge Cricket Ground, the hosts benefitted from key partnerships after they lost left-hander Kjorn Ottley for one with just three runs on the board in the first over, nicking a loose drive to the wicketkeeper off left-arm pacer Khaleel Ahmed (4-67).

Thomas, promoted to number three, then put on 73 for the second wicket with opener Sunil Ambris, who made 46, and then added 81 for the third wicket with Chase.

It was Ambris who did the bulk of the scoring early on, stroking six fours and a six in a 36-ball cameo before holing out to long off in the 15th over off left-arm spinner Krunal Pandya.

Thomas counted four fours, and four sixes, in a calculated 95-ball knock but like Ambris, found the fielder on the ropes at long off in the 33rd over off off-spinner Washington Sundar.

Chase and Carter then combined in an exhilarating 97-run, fourth-wicket stand which further accelerated the scoring rate and put West Indies A on course for 300.

In a 100-ball stay at the crease, Chase stroked four fours and two sixes while Carter faced 43 deliveries and counted eight fours.

Chase appeared set for three figures when he picked out mid-wicket with Khaleel, and his dismissal triggered a collapse as West Indies A lost six wickets for 35 runs, with seamer Avesh Khan finishing with three for 62.

West Indies set back India A early in their run chase when Anmolpreet Singh was run out for 11 by Sherfane Rutherford’s direct hit from mid-off in the sixth over, and opening partner Ruturaj Gaikwad (21) nicked Paul’s out-swinger to wicketkeeper Thomas in the following over.

Pandya, whose 45 came from 56 balls with five fours, then rebuilt the innings in partnerships of 46 for the third wicket with Hanuma Vihari (20) and 41 for the fourth with captain Manish Pandey (24).

His dismissal – taken low down at short mid-wicket by Carter off left-arm spinner Khary Pierre in the 25th over – left India A once again with the task of rebuilding as Pandey followed in the next over, caught and bowled by Powell.