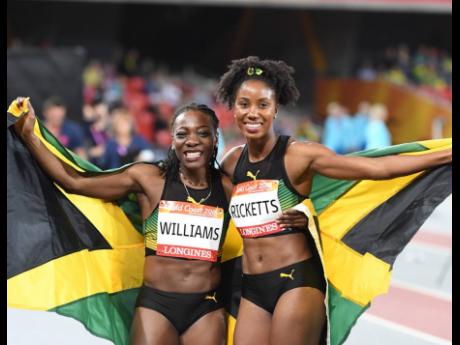 Jamaican duo Kimberly Williams (left) and Shaneika Ricketts pose with the flag after mining gold and silver in the triple jump event at the 2018 Commonwealth Games in Gold Coast, Australia.

Triple jumpers Shanieka Ricketts and Kimberly Williams will feature in a virtual World Championships rehearsal at the Pan American Games in Lima, Peru, this week.

According to jump expert David Riley, the Jamaicans can use the event to ready themselves to compete for medals when the World Championships begin late next month.

The five best jumpers of 2019 – world outdoor and indoor champion Yulimar Rojas, Olympic champion Caterine Ibarguen, Cuba’s Liadagmis Povea, Ricketts and Keturah Orji, the American, who placed fourth in the Olympics, are all set to meet in Lima, with Rojas leading with a national record of 15.06 metres.

“Big event, big event. (It) should be quite a few women (jumping) over 14.30m and great excitement to the crowd, and of course, the Venezuelan and the Columbian, they’re both very great entertainers, so that should be a spectacle,” said the Excelsior High School head coach, with particular reference to Rojas and two-time defending Pan Am champion Ibarguen, who placed first and second at the 2017 World Championships.

“It speaks to the power of this region as well. Traditionally, you would expect the Europeans to dominate, but certainly the NACAC region is doing a lot of work in that area, so we’re very competitive,” Riley added.

Williams was second to Rojas at the 2018 World Indoor Championships final and the two-time Commonwealth champion stands eighth on the 2019 performance list at 14.56 metres.

“Kimberly (Williams) has not been competing a lot on the circuit, so this competition will be one for her that she can use to further improve her technique,” he presupposed.

Encouraged by a personal best of 14.76 metres on her 27th birthday, February 2, Ricketts and her coach/husband Kerry-Lee, have hinted that their target is the 15-metre barrier.

“I don’t see why not”, Riley concurred. “Now, she’s much stronger, she’s faster, the distances will come.”

He hopes that the length of the season won’t be a problem.

“She’s been jumping for quite a while, which can be a problem for the athlete if you’re stuck in a particular rhythm, in a habit, and so the routine of jumping almost prevents you jumping even further, so it’s kind of an interesting choice for her.”

Overall, Riley thinks the Pan Am Games will boost their preparation for the World Championships.

“The reality is that medals are within striking distance and if they can improve some things technically, they are jumping about the medals in Doha.”

Together, Williams and Ricketts will hunt Jamaica’s first Pan Am triple jump medal since Suzette Lee took the silver in 1999.