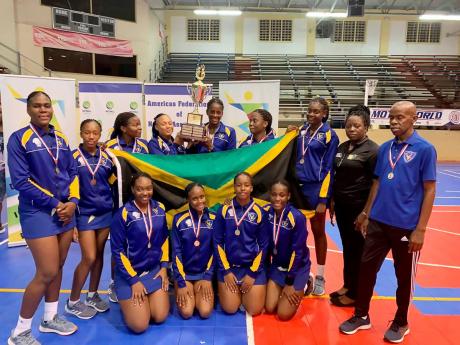 Contributed
Members and support staff of the Gaynstead High School netball team pose with their trophy after capturing the Americas Federation of Netball Association Champion of Champions title in St Maarten.

The competition, which had the rural and urban champions, Holmwood and Excelsior, respectively, representing last year, only saw one Jamaican team competing this year as rural champions Denbigh High failed to make the trip due to lack of funding.

Led by National Under-21 player Latanya Wilson, the Dalton Hinds-coached Gaynstead team was dominant throughout the competition, winning all five of their matches against opponents from Barbados, St Maarten, St Vincent and the Grenadines, and St Lucia, which had two representatives at the tournament.

In their opening match, the team from Central Avenue went up against Micoud High from St Lucia, and they set the early pace with a convincing 34-14 win. In their next match against Central Leeward from St Vincent and the Grenadines, there was an even bigger margin of victory for the Jamaicans, who ran out easy 52-11 winners.

Gaynstead’s next three matches produced the same outcome as they stopped St Joseph Covenant from St Lucia 49-7, a St Maarten combined team 77-3, and the previously unbeaten Christchurch from Barbados 37-27.

Following her impressive play in defence, Wilson, the lanky goal defence, who also had a stint in the national senior programme last year during the Test series against Trinidad and Tobago and England, was named tournament MVP.

Manager of the team Derrick Brown was elated with his team’s overall performance at the championship.

“The team did exceptionally well. They were disciplined and stuck to the game plans, and as a result, they were victorious, and we were very proud to know that we kept the Jamaica flag flying, following the success of Excelsior on home soil last year,” said Brown.