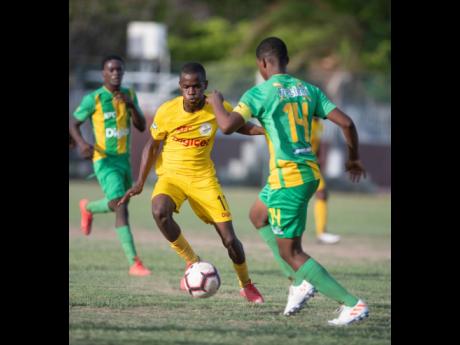 Kingston High substitute Delano Thompson missed a glorious opportunity in the85th minute, which would have secured an upset victory for his team over Charlie Smith in their Group B ISSA/Manning Cup encounter at Breezy Castle yesterday.

His teammate, Keshawn Wisdom, had given Kingston High a surprise lead in the 32nd minute before Clive Beckford netted the equaliser for Charlie Smith in the 40th minute as both teams ended up settling for a point apiece in a 1-1 scoreline.

The point was Kingston High’s first of the season after they were beaten 3-1 by Denham Town in their opening game of the season. Charlie Smith have now recorded one win and draw from their two matches this season.

Keith Johnson, coach of Kingston High, said he was delighted with his team’s performance against one of the stronger teams in the competition.

“I have to give thanks for what they are doing because they are coming from nothing, and they gave their all against Charlie Smith, and so I have to respect that from them,” said Johnson. “This point is a big point for us because this is like we win the Manning Cup.”

“We played well because we scored against the run of play, but we fell back, and so they equalised against us, but all in all, it was a good game from us, and I am happy for the boys,” Johnson added.

On the other hand, Eugene Williams, assistant coach of Charlie Smith, said his team failed to play according to their game plan.

“I am disappointed with my team’s performance, but you have to give Kingston High credit because they got a point and it is like a Manning Cup final victory for them,” said Williams, adding that the heavy afternoon breeze at the venue prevented his team from playing their normal game.

“I think my team took them lightly because we didn’t play the way can play, and the field is not somewhere you can get a quality football game as the place was too windy,” Williams said.

Meanwhile, defending champions Kingston College recorded their second victory of the season with an easy 5-0 win over hosts Pembroke Hall. In the group’s other game, Excelsior beat Dunoon 3-0.