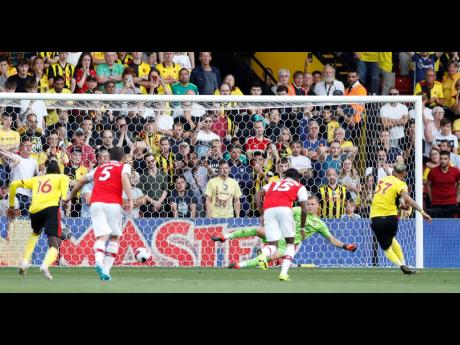 Alastair Grant
Watford’s Roberto Pereyra (right) scores his side’s second goal from the penalty spot during the English Premier League against Arsenal at the Vicarage Road stadium in Watford, near London, yesterday.

After spells in charge of Espanyol in Spain and Shanghai Shenhua in China, Quique Sánchez Flores returned to the thrills and spills of the English Premier League (EPL) yesterday as his Watford side drew with Arsenal 2-2.

Flores, who left Watford in 2016 but returned to take over from the fired Javi Gracia, began his second reign as manager by leading the last-place team to just their second point from five games.

But it could have been even more. The Spaniard was left holding his head as Arsenal goalkeeper Bernd Leno denied Abdoulaye Doucouré what would have been a dramatic winner in injury time.

Pierre-Emerick Aubameyang scored twice for Arsenal, but the visitors had no answer to Watford in the second half and will be relieved to have escaped with a point.

Aubameyang scored against the run of play in the 21st minute after Dani Ceballos won the ball with a crunching tackle on Will Hughes. Sead Kolasinac ran forward and passed to Aubameyang, who stopped the ball with his left boot and spun around to fire it in with his right.

It was almost 2-0 minutes later after Ceballos found Mesut Özil, whose cross Aubameyang just failed to reach. Özil was making his first league appearance of the season.

Özil showed just what Arsenal had been missing in the 32nd when he split the Watford defence with a brilliant ball to send Ainsley Maitland-Niles though. The Arsenal right back crossed to give Aubameyang a simple finish for his second goal, and his fifth of the season.

But Arsenal were lacklustre after the break and gifted Watford a goal back in the 53rd when Leno passed to Sokratis, who attempted a straight ball forward to Guendouzi. Gerard Deulofeu intercepted the ball, which fell to Tom Cleverley to hammer back past Leno for 2-1.

The visitors continued to wobble as Watford continued to dominate. David Luiz fouled Roberto Pereyra just inside the penalty area and the Argentine midfielder dusted himself off to equalise from the spot in the 81st.

Wilson put the home side ahead after a corner in the 23rd minute. Dominic Calvert-Lewin equalised before the break, but poor ­defending thwarted the Toffees’ hopes of a point.

Bournemouth and Everton both have seven points.